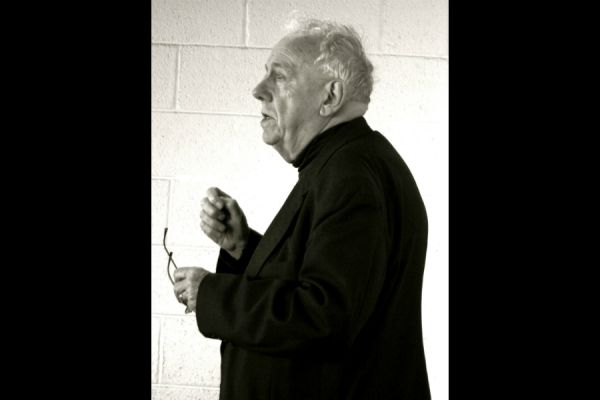 In order to have a perfect friendship between two people, Aristotle said that both must be models of goodness and virtue, willing the good of the other and loving each other for their own sake.

Such people could have other kinds of friendships, Aristotle said – friendships of utility or pleasure – but they could never have perfect friendship.

It was this view of friendship with which moral philosopher Alasdair MacIntyre took issue in his Nov. 8 address at the di Nicola Center for Ethics and Culture’s 20th annual conference, which this year had the theme of friendship.

“For (perfect) friendships, so Aristotle tells us, we have to be good in ways and to a degree that…if we’re honest, many of us know that we’re not,” MacIntyre said.

MacIntyre pointed to other still unsatisfactory definitions of friendship, such as that from Dale Carnegie, who wrote the 1936 book “How to Win Friends and Influence People.”

But what Carnegie suggests will not help one have real friends, MacIntyre said, but will manufacture “a certain kind of superficial sociability, a sociability which no one of integrity could confuse with friendship.” Such friendships, he added, might be compared to someone who is a Facebook friend and nothing more.

Friedrich Nietzsche, on the other hand, concludes that “yes there are friends, but it’s error and deception regarding yourself that led them to you, and they must have learned how to keep silent in order to remain your friend.”

With these different definitions and ideas of friendship, what then does it mean to truly be a friend? While hoping to broaden the scope of friendship beyond that which is available to the Greek male elite, MacIntyre said there are still many types of relationships that, while friendly, are not true friendships.

Such relationships include, for example, those between coworkers, where a certain amount of friendliness is helpful in achieving common goals and completing tasks together, or relationships between parents and children, between siblings, or between members of groups such as rock climbers, people in a choir, or members of a surgical team, MacIntyre said.

With such relationships being so prolific in our lives, MacIntyre said some may be tempted to wonder what the use is of another kind of friendship after all.

In his response to this question, MacIntyre said that because human beings are dependent rational animals who need to be able to make good judgements about themselves and the world in order to flourish, a key element of true friendship then is the ability to tell one another the truth.

This other – a true friend – must not only be a “perceptive inquirer” and “scrupulously truthful,” they must “care enough about us and about our flourishing as human agents to insist on us, too, being truthful, so with their help, we may become able to correct our mistakes and to free ourselves from our illusions.”

True friendships must also be uncalculating of the costs and benefits of the relationship, and must be relationships in which “each friend genuinely cares both for the other and for the good of the other and finds in this caring a sufficient reason for acting as she or he does,” MacIntyre added.

St. Thomas Aquinas, MacIntyre noted, was also able to “correct” some of Aristotle’s deficiencies in his definition of friendship by recognizing that people possess various virtues in varying degrees, and that grace and charity can account for some of the ways baptized persons act that go beyond either their natural inclinations towards virtue or their moral education in the virtues, which allows for a broader understanding of friendship.

“So a more recognizable portrait of humanity emerges – and one sometimes wonders how many people Aristotle had actually met,” MacIntyre said.

This more recognizable view of humanity is “one in which moral education has become the work of a lifetime, and moral failure in this or that respect is a recurrent and characteristic feature of our lives. It matters, of course, that Aquinas writes as a Christian theologian and therefore is someone for whom their sinfulness is one of the key facts about human beings,” he added.

This more flexible view of humanity also allows that good friendships can be schools of virtue, rather than just something that occurs between two people who have already achieved perfect virtue, because these friendships are “a means to self-knowledge. Friendships survive and flourish…only if each friend can rely on the other’s truthfulness. And without the self-knowledge that is one result of such truthfulness we’re all of us apt to become victims of our own self-indulgent fantasies,” he said.

An additional key element of a true friendship is that it is a gift, MacIntyre said. A gift is freely given, and must be received. This means that one must be open to the possibility of friendship with others, and recognize the opportunity of friendship when it occurs.

This requires a responsiveness to others, as well as a willingness to be surprised or disappointed along the way, he noted. It means letting go of pride, or of greed or an unnecessary competitiveness with others, he added.

“An insincere person invites others to respond not to their reality, but the sometimes impressive fiction that they have constructed. So the other is put at a disadvantage and when the invitation extended to the other is or includes an offer a friendship, what is offered cannot, in fact, be friendship. For one is being invited to care for a fiction, not for a real human being,” he said.

A final characteristic of a true friend is that they care not only for their friend, but for all that their friend cares about, MacIntyre said, quoting Aquinas: “When the man has friendship for someone for his sake, he loves all belonging to it, whether children, servants or related to him in any way.”

“Indeed, so much do we love our friends, but for their sake we love all who belonged to them,” MacIntyre said.

And so with these defining characteristics of a good friendship, they still may be difficult to find in today’s world, MacIntyre said, but they are possible and necessary for human flourishing.

Washington D.C., Jun 9, 2021 / 11:02 am (CNA).
The website of the University of Notre Dame has a feature post celebrating LGBTQ+ Pride on its diversity and inclusion page this month. “Pride Month… […]