Evangelization is not something most Catholics are terribly comfortable with. For some, it has a distinctly Protestant connotation—why that is the case is another question, as we are all called by Jesus to spread the Gospel. For others, it is challenging enough to come out of their comfort zone and speak to others, let alone to do so in the context of religion. 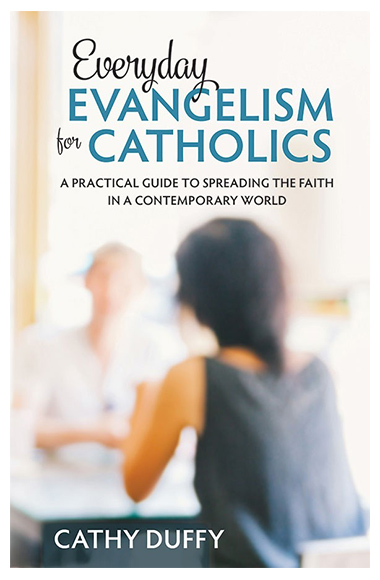 Cathy Duffy has written a book that looks at how Catholics are called to evangelize, and how we can do this in every aspect of our daily lives. Evangelization is not something only done by Protestants, as some seem to think; nor is it something only to be done on Sunday, or in a particularly “churchy” atmosphere. On the contrary, Everyday Evangelism for Catholics (TAN Books, 2018) shows how we should evangelize at every opportunity.

Duffy spoke with Catholic World Report about her book, and the ways in which Catholics can evangelize in every moment in our daily lives.

CWR: How did this book come about?

Cathy Duffy: Everyday Evangelism for Catholics is the result of the decades I have been involved in practical, personal evangelism. Lots of ideas had been bubbling in my mind over the years. But the impetus for putting them into the form of a book actually came from a practical evangelism course I took. The course was great for those who want to practice apologetics, but I thought it missed the sort of personal evangelism opportunities that are readily available to everyone. I had thought about evangelism so much that I was able to write it fairly quickly, in less than six months.

Since I’ve written a number of books before, and I’ve both worked with publishers and done self-publishing, I thought at first I would self-publish the book. I had the book written and had hired someone to start working on the layout when Lent began. One of the Lenten sacrifices I felt God was asking of me was to give up control of the book—to give it to a publisher. I’m enough of a control freak that this was truly a sacrifice. When I realized what God was asking, that same day I contacted someone I had dealt with before at St. Benedict Press/TAN Books. I had to do this before I started second guessing myself and making excuses to not contact a publisher! St. Benedict Press was interested, and so I sent them the book and left it for them to make a final determination over the next month or so. I had approached them outside the normal channels, and they hadn’t yet seen the book, so I figured that if God wanted me to hand it over to them for publication, it would work out. They accepted the book, and I have to say they’ve done a great job with it.

CWR: Why is this a topic you are passionate about?

Duffy: I was raised Catholic and went all the way through high school at Catholic schools. However, like so many others, my faith was shallow. I left the Church, and stopped attending any church for a few years. I eventually ended up at Calvary Chapel with my husband, who had just become a Christian. We were heavily involved at a branch of Calvary Chapel for about 20 years. It was during those years that I learned that evangelism is the mission of every Christian.

Because of connections with Youth With a Mission, Teen Missions, Wycliffe Bible Translators, Harvest Crusades, and other evangelistic Protestant organizations, I was exposed to the idea that “normal” people can easily get involved in evangelism.

Meanwhile, we were homeschooling our own children, and I had become very involved with leadership in the homeschool movement. I was teaching, writing, and speaking on various topics. One of the most important topics was worldview education. This was based on the idea that we all operate from a worldview, and our worldview is based on our fundamental beliefs about big questions such as the existence of God, the nature of man, the nature of reality, the source of truth, etc. Worldview education explores how those fundamental beliefs shape our understanding of all areas of life: religion, history, science, sociology, movies, culture, economics, etc. Evangelism is one aspect of worldview education. I was teaching homeschooled teens and parents, as well as presenting sessions on worldview at homeschool conferences.

In other work in which I was involved, I had opportunities to have worldview-based discussions—a form of evangelism—with people of many different religious and non-religious backgrounds. So evangelism had become a significant part of my life while I was still in the Protestant world.

All of that forced me to continually think through my own theological grounding, which eventually resulted in my return to the Catholic Church in 1998. Because I had been so vocal about worldviews and religious beliefs, my rejection of the Protestant position and embrace of Catholicism was exceptionally controversial. While my shift caused huge upheavals in both my personal life and my work, it also gave me many opportunities to share with others why I had made this difficult decision—yet another form of evangelism.

After I came back to the Church, I learned about the RCIA process and I volunteered to help. I thought this was a perfect place for me because I know all about the hard questions that many people have to confront when considering becoming Catholic. I was convinced there needed to be places such as RCIA Inquiry sessions where people could ask any questions no matter how threatening they might sound.

I ended up directing RCIA at our parish for almost ten years.

A gentleman who helped with RCIA made a comment one day that the opportunity to ask questions needed to be more readily accessible to people, so he built a portable table with a sign that we could set up in the courtyard that says, “Got Faith Questions?” I no longer run RCIA, but most Sunday mornings I’m at that table through the morning Masses just to be available for questions or for those who want personal prayer. …

By virtue of our baptism, every Christian is called to share the good news of the Gospel. If we truly understand how great the Gospel message is then we should be eager to share that with others. I think many Catholics understand this, but they feel incompetent, ill-prepared, and uncomfortable. I want to help Catholics overcome those barriers and realize that they can practice evangelism in surprisingly easy ways.

CWR: “Evangelism” is a term that, for many people, conjures up images of Bible-thumping preachers in the park, Mormon missionaries, or televangelists. But Catholics are also called to evangelism. How should they go about it?

Duffy: All Christians are called to evangelism, but it’s a question of what’s the most effective way to go about it. In our present culture, tactics that might have worked in the past are increasingly unlikely to work. We have to be much more relational. We have to sincerely care for those we hope to evangelize. We have to be ready to invest time in building relationships and making ourselves available to others before they are going to want to listen to what we have to say about God or faith. People are starving for real relationships, for people who will really listen to them.
I believe that, in most cases, effective evangelism happens when we first spend time listening to others. That’s the foundation for building trust that eventually gives us the credibility with others to share our own stories about how God has moved in our lives and why we have faith in God. Teddy Roosevelt is credited with having said, “Nobody cares how much you know until they know how much you care.” I think that applies in evangelism. Yes, there are a few people who have theological questions and want to have an apologetics-oriented discussion, but far more people operate on another level that has little to do with apologetics and much to do with relationships.

CWR: Is the title “Everyday Evangelism” a nod to St. Peter’s call that we “pray without ceasing”? Should we evangelize with our very lives?

Duffy: While I wasn’t thinking of it as “praying without ceasing,” I do see evangelism as a mindset that we have all of the time. We should be constantly aware of the people around us and looking for opportunities to make ourselves available. When I know I’m going into a situation where there might be opportunities, I will often pray in advance for God to show me those opportunities, to open the door for meaningful conversations and relationships. This is an attitude that says, “Let me be the voice, the ears, the presence of Jesus to those I encounter.”

CWR: Did you discover or realize anything over the course of writing this book that was particularly surprising to you?

Duffy: While I was writing it, I became increasingly aware that most Catholics don’t have a clue where to start with evangelism. I had become so comfortable with it, that I was surprised to find such widespread discomfort about evangelism among fellow Catholics.

Duffy: After it came out, people who read it often commented, “You make it sound practical. I can see myself doing this.” That’s my goal. I want to make evangelism accessible to the average Catholic. I don’t want them thinking that they need apologetics training before they can begin.

In a number of chapters I address the thresholds of conversion. This is the idea that people generally move through a progression of steps before they are fully committed in their faith. The steps as I list them in the book are trust, curiosity, openness to change, serious seeking, and becoming a missionary disciple. (These thresholds are based on the work of Don Everts and Doug Schaupp in I Once Was Lost.) I want Catholics to understand that people can be at different points in their spiritual journey. It’ not just a question of being “in” or “out.”

We begin to understand where they are in terms of these thresholds by listening to them, and asking the right questions. Recognizing where they are at helps us address the concerns they have at this stage of their journey, rather than ones we think they should address. For example, if we are talking with a lapsed Catholic who has completely abandoned the faith and questions the existence of God, suggesting that they go to Confession is not helpful and is possibly very off-putting. It would be more helpful to have a conversation to first understand why they quit believing in God. Then you might have opportunity to share why God is real to you… how He has worked in your life, maybe how He has answered prayer. Getting [the person] back to church and the sacraments comes later. You are trying to rouse a spark of curiosity about God and their relationship to Him first before they’re going to even consider doing something about it.

All of this is dependent upon prayer and an understanding that conversion is the work of the Holy Spirit. He’s the one who changes hearts and minds. But He gives us the privilege of being part of that process if we take advantage of the opportunities available to us.

About Paul Senz 82 Articles
Paul Senz recently graduated from the University of Portland with his Master of Arts in Pastoral Ministry. He lives in Oregon with his family.