Between 1996 and 2017, Alfred Regnery and a friend made 11 pilgrimages, starting with one to Mount Athos in Greece and concluding with another in Greece along the Via Egnatia, which St. Paul had traveled on his third missionary trip. In between, they hiked and biked along two famous medieval pilgrimage routes — the Camino de Santiago de Compostela in Spain and the Italian segment of the Via Francigena. The latter, Regnery notes, was “the principal road from the Holy Roman Empire to Rome … stretching 1900 kilometers from Canterbury, through England, France, and Switzerland, and into Italy and along the western side to Rome.” 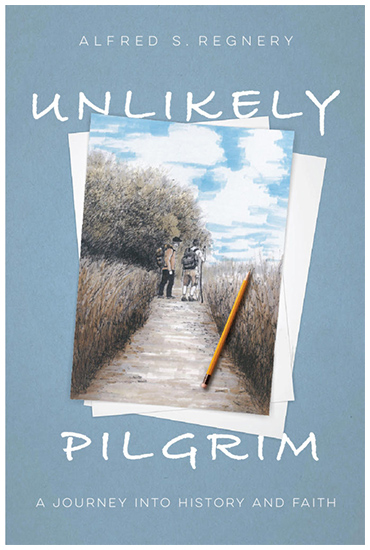 The two also visited Syria before the country became inhospitable to such a venture, biked around Normandy and Brittany, and went to Turkey to see Nicaea and the seven churches mentioned in the Book of Revelation. They went to several countries in the former Soviet bloc: Poland, Romania, Bulgaria, and Albania.

When they started, Regnery was an Episcopalian, but after a few pilgrimages he converted to Catholicism, though he does not provide much detail about that (except to say that it was “influenced in no small part by John Paul II’s consistent demonstration of unwavering faith in God and Jesus Christ”). Of himself he says that “I could probably be called a Washington insider and, by some, even a D.C. swamp dweller.” To wit: “I have spent nearly forty years living in and around the capital city, worked in the highest levels of the federal government, participated in meetings and negotiations with national and international leaders, and have been invited to the best parties, dinners, and embassies.”

He was president of Regnery Publishing, founded by his father, until he sold it in 1993, and is the author of Upstream: The Ascendance of American Conservatism.

As for his traveling companion, Nick “wishes to remain at least partially anonymous.” He “has had a different career, but one just as varied, as interesting, and as sophisticated—maybe more so; his path was in academia and in the diplomatic world, in government, and in ecclesiastical circles in the U.S., in Great Britain and around the world.”

So what we have here is a religious travelogue, and it is at once uplifting and dismaying. Underlying both the uplift and the dismay is the same insight:

Paramount among the discoveries we made on these pilgrimages is the recognition that Christianity and Western Civilization are inalterably intertwined. Oh, we both knew that long before we embarked on these pilgrimages. But that recognition was solidified again and again, virtually everywhere we went, whether we were looking for Christian sites or not. Everywhere we went we found evidence of the Christian world, whether from the earliest days of the Church, from medieval times, or from the turmoil of the twentieth century.

But in large swaths of traditionally Christian Europe — in France, in particular, though also in Italy — the faith is moribund. Typical was the visit to Avranches in Normandy, where “a revivalist Gothic Cathedral, Notre Dame de Champs, was built in the late nineteenth century as part of efforts to restore Catholicism to the region. But it and several other smaller Catholic churches were all closed and no masses offered, even though it was Sunday … Later in the day we did find two old and well-kept churches, but both were empty of people, no masses given. Just museums.”

Later, when visiting Laodicea in Turkey, Regnery sees a parallel between the religious decline in Western Europe and America and the message of judgment and call to repentance directed at the church in Laodicea in Revelation:

the vast materialism and wealth enjoyed by our culture, the luxury, and even the great emphasis on fitness and health seemed to parallel the situation in Laodicea. The Laodicean culture, as that of the United States and Western Europe, was built on high living and material benefits, increasingly made available to much of the population. Faith, as it had become in Laodicea, had largely been abandoned in Europe and was suffering a similar decline across North and South America.

But if the decline in faith in Western Europe was dismaying, its flourishing in Poland, Romania, and Albania provided cause for hope. Albania proved particularly enlightening. Under its communist dictator, Enver Hoxha — whom Regnery says “made Romania’s Nicolae Ceaușescu look like a piker“ — Albania had “outlawed all religion and shut down all churches, mosques, and other religious sites, turning them into warehouses, stables, military barracks, or whatever else, and killed hundreds of priests, nuns, monks, imams, and other religious people.”

Tellingly enough, the airport in Tirana, the capital city, is now named after a famous Albanian of a different stripe — Mother Teresa. A good chunk of Albania’s population remains atheist, but about half is Muslim, 30 percent is Orthodox, and another 20 percent Catholic. The Muslims belong to a mystic sect and are known as Bektashi. They get along with Christians, sometimes intermarrying and even converting. Small wonder they are considered infidels by the more troublesome Wahhabi Muslims. All three religions are taught in the schools. The government guarantees religious freedom, but remains neutral on the subject, and is in fact strictly secular.

The Church of Laci, built in the 12th century and located on a mountainside, is dedicated to St. Anthony of Padua and is a place of pilgrimage. In 2010, the year Regnery and Nick visited, an estimated 500,000 people climbed the mountain. These were people, Regnery points out, “who would have gone to prison until twenty years ago if they even mentioned religion.”

Much the same proved to be the case in Romania, a largely Orthodox country (the Catholic population is about 15 percent, and another 3 to 4 percent is Protestant). An Orthodox abbot told Regnery and Nick that the resurgence of faith was a natural response to the excesses of the Ceausescu regime. He said it “blossomed forth like wildflowers in the forest in the spring.”

As for Poland, it is, as Regnery notes:

the most Christian country in Europe, boasting a long and proud alliance with the Roman Catholic Church that remains unrivaled anywhere in the world. It was the only Warsaw Pact country to maintain its deep faith from the end of World War II to the fall of communism in 1989; its culture survived through the faith of its people and largely, according to Polish Catholics, because of the Virgin Mary, who has played a unique role in Poland’s history for 300 years. In 1717, Poland crowned the famous Black Madonna of Częstochowa as Queen of Poland. She has remained Queen ever since, and Poles claim she is responsible for the survival of the Polish culture through the nation’s many trials ….

The contrast between the flourishing of faith in places where it had been severely persecuted and its withering in the lands of what is called the free world turns Unlikely Pilgrim into something of a cautionary tale. The decline of faith in Western Europe — and yes, the United States — has not come about by force, but through indifference and complacency. But the forces of secularism are becoming increasingly bolder in taking advantage of that.

Recently, for instance, Tammy Kemp, the judge who sentenced former police officer Amber Guyger to 10 years in prison for killing her neighbor, had a complaint filed against her by an atheist group, the Freedom From Religion Foundation, for giving Guyger a bible. According to the complaint, “Delivering bibles and personally witnessing as a judge is an egregious abuse of power.”

Last year, the University of Iowa banned a Christian organization from its campus because the group insisted that its leaders be Christians. (A court this year ruled against the university.) And Duke University’s student government senate last year voted to deny recognition to a Christian group because its leadership team requirements do not allow LGBT members to be on that leadership team.

These are what might be called acts of soft suppression. But accounts of them can be found on the internet with disturbing frequency, and if enough succeed, suppression of a sterner sort is likely to manifest itself. In the United Kingdom recently, a physician was forced out of his job at the Department of Work and Pensions because he disagreed with transgender identity, citing his Christian belief in Genesis 1:27, which says that God created humans male and female. Interestingly, a report commissioned and released by the British government described the current state of Christian persecution throughout the world as being “close … to genocide.”

Regnery’s book reminds the reader of how things once were, and still are in places, but the faithful reader cannot help but finish it with a certain sense of foreboding.