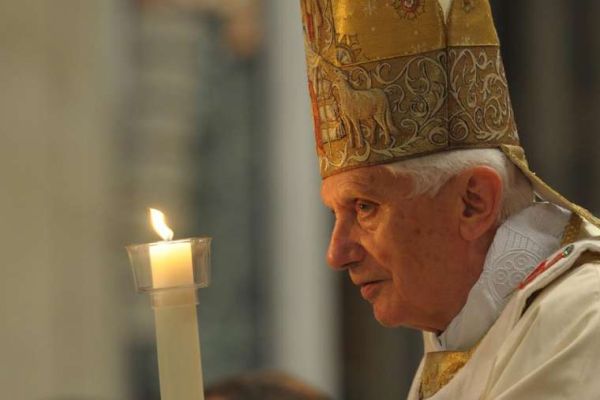 Vatican City, Sep 28, 2019 / 02:02 pm (CNA).- Just days before the Amazon synod of bishops is to convene in Rome, a symposium of students of Pope Emeritus Benedict XVI published a statement of concern regarding the possibility of married priests, a controversial topic of discussion at the upcoming synod.

“The vocation as well as the existence of the priest are solely dependent upon the will of Jesus Christ alone and are not derived from either human considerations or Church regulations. In Him and with Him the Priest becomes the ‘proclaimer of the Word and the servant of joy,’” the students said in a public statement September 28.

“As the priest only exists from his relationship with Christ, a participation in the lifestyle of Christ would seem to be appropriate for those who are to act his person,” the statements added.

“According to the constant tradition of the Latin Church, celibacy is seen as a clear witness to a belief-filled hope and generous love for Christ and his Church.”

The statement was given by the Circle of Students, as well as the New Circle of Students of Joseph Ratzinger/Pope Benedict XVI, at a symposium in Rome with the theme “Recent Challenges of the Ordained Ministry in the Church.”

The “Ratzinger Schuelerkreis,” or “students’ circle,” has met to discuss topics in theology and the life of the Church since 1978, when their professor was pulled from academia to become a bishop. Their annual meetings continued with their former professor even after he was named Pope Benedict XVI in 2005. The “New Circle” is comprised of graduate or doctoral students studying the theology and life of Pope Emeritus Benedict XVI.

The theme of the group’s meeting came from a topic that will be discussed at the upcoming Amazon synod, namely, whether to allow already-married and “proven men” (or “viri probati”) to be ordained as priests in the region of Amazonia in order to help alleviate the shortage of priests in the area.

“Affirming that celibacy is a gift for the Church, it is requested that, for the most remote areas of the region, the possibility of priestly ordination be studied for older people… even if they have an existing and stable family, in order to ensure availability of the Sacraments that accompany and sustain the Christian life,” a section of the working document for the Amazon synod states.

The Amazon synod will be held at the Vatican Oct. 6-27. Pope Francis said in August that the topic of ordaining married priests will “certainly not” be the main topic of discussion at the Synod.

The statement on priestly celibacy given by the students of Pope Emeritus Benedict XVI is the first time they have spoken publicly as a group in “many years,” they said, but they felt convicted to bring “the theological thought of the Pope Emeritus…to the wider public.”

The students noted that priests do not have a simply functional role in the Church, but that they are called to be a “re-presentation” of the person of Jesus Christ both in the celebration of the sacraments and in their personal lives of holiness and devotion.

Remaining single and celibate as a witness to the kingdom of God is “a human as well as spiritual expression of the sacramental unity of the priest with Christ,” the students noted.

They added that the current sex abuse scandal of the worldwide Church “reduces the believability” of the priest as a person in union with Christ, but that the answer to this “is not first and foremost structural reforms that will bring healing and relief, but an authentically lived life of faith.”

“Only when we all return united to our common understanding of Jesus Christ as true God and true man will the Church be able to be renewed,” they stated.

Prof. Dr. Christoph Ohly told the symposium that it was a “gift” for priests to be able to conform their lives to Christ in such a way.

“The gift of the priest’s conformation to Christ consequently becomes his mission, in his style of life, his personal attitudes, his life of prayer as well as in the duties assigned to him.”

In her comments to the symposium, Dr. Marianne Schlosser also noted that the priesthood is not a functional role but a vocation of “personal identification with Christ, the Good Shepherd.”

A celibate life seems to follow as part of this vocation, she added, because it was “Christ’s own way of life, who gave his life for humanity, even unto death.”

“Celibacy is a telling witness of the faithful person’s hope for eternal life. By renouncing marriage and the founding of a family, celibacy wants to foster a generous love for the entire (family of Christ) as well as a personal bond with the Lord,” she added.