Learning history in secular universities often results in a detached attitude toward God’s involvement in human affairs. It is an inevitably anthropocentric way of looking at the world and our place in the flow of time; the human sits at the epicenter of all history without any input from the Deity who gave the man the will and the intellect to become beings with history. 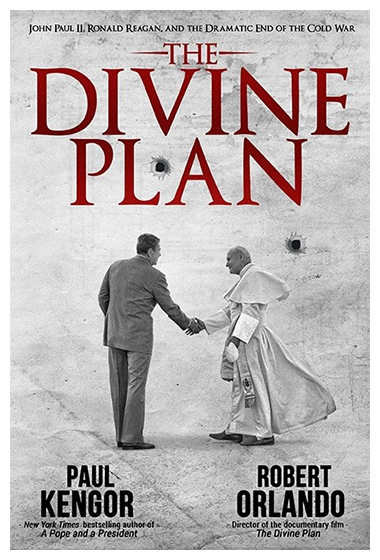 Studying the Cold War with such an implicit assumption inadvertently led me to see only the footprints of men in the messiness of world affairs. Yet, the Creator of the universe is not the proverbial clock-maker who wound his creation and let it go, until either it stops or destroys itself. The Triune God is interested in his creation so much that the second Person of the Trinity became man. If he so loved, wouldn’t he gently nudge our ever-destructive species away from self-annihilation through nuclear war? In The Divine Plan Paul Kengor and Robert Orlando present a case that God cares enough to guide bullets and encourage us to avoid to mutually assured destruction, even while working within the limits of free will.

On the cover, President Ronald Reagan and Pope John Paul II shake hands and smile. Two bullet holes hover above their heads despite their pleasant demeanor. Dr. Paul Kengor, a professor of political science at Grove City College, already wrote a hefty tome about this iconic scene and its actors, titled A Pope and a President, published in 2017 by the Intercollegiate Studies Institute, which also published The Divine Plan. Kengor’s co-author, Robert Orlando, is a writer and filmmaker who also wrote and directed a companion documentary for The Divine Plan. The book is short and easy to read. The authors combined primary documents written by Reagan and John Paul II with testimonies of eye witnesses. Secondary sources range from well-known Catholic figures, such as Bishop Robert Barron and Cardinal Timothy Dolan, to non-Catholic ones such as historian and journalist Anne Applebaum and historian Douglas Brinkley. The variety of the resources provide a range of interesting perspectives about these monumental figures.

While their respective careers in acting gave both men an ease with crowds and a talent for communicating through the ubiquitous medium of television, their family lives were not similar at all. Reagan did not have his father as a role model, but he instead turned to God to fill that absence. On the other hand, Karol Wojtyla’s father was a faithful man who guided his son with loyalty and love. As Cold War unfolded, despite coming from completely different backgrounds, Reagan and John Paul II cultivated a similar animosity toward communism.

The book is divided into five acts, the most of important of which is Act III, in which the authors summarize how, because of similar near-death experiences, these “two actors in a divine plan” realized, perhaps once more, that every breath they took was a gift from the Creator.

The spring of 1981 would remind both men that their lives ultimately did not belong to them. John Hinckley’s bullet barely missed Reagan’s vital organs but caused the President to lose almost half of his blood. The President’s life was spared, despite coming within an inch of death. From then on, Reagan “seriously began to think that there was some destiny here” (p. 122). Believing that God actively intervened to save his life proved to be a turning point for Reagan, who recorded in his diary: “Whatever happens now I owe my life to God and will try to serve him in every way I can” (p.123).

Unlike that of Hinckley, the hand that pulled the trigger in Saint Peter’s Square on the feast day of Our Lady of Fatima belonged to a trained Turkish assassin, Mehmet Ali Ağca, who did not miss his target easily. But that day the Divine Author had different plans, which did not include the demise of the vicar of Christ, who repeated “Mary, my mother; Mary, my mother” as he collapsed. The Pope came so close to death that he received last rites on the operating table. When his life was spared, the Pope credited the Mother of God: “For everything that happened to me on that very day, I felt that extraordinary motherly protection and care, which turned out to be stronger than the deadly bullet” (p.127).

Both men turned their eyes on the “Evil Empire.” Reagan identified as a born-again Christian, having grown up with a mother who was active in a Disciples of Christ church. His Catholic father was not a positive influence in his life, yet Reagan encountered other Catholics, such as Mother Teresa, who inspired him. A Protestant president and the Holy Father shared the common desire to end the totalitarianism of the Soviet Union. The time they were given after the assassination attempts forged a new bond between the two, oriented toward this objective. The Divine Plan takes the reader through the inner journey of these two actors toward their common goal.

Whether intentionally or not, a third actor emerges in the pages of the book as an intricate and irreplaceable part of the divine plan: Mikhail Gorbachev. While the authors’ desire to focus on President Reagan and Pope John Paul II is understandable, the overarching theme that there is a divine plan, despite our failings, would have been more complete with more emphasis on the role of the Soviet chairman. Nevertheless, the reader still gains a glimpse of the man who played a significant role in bringing down the Soviet Union despite his intentions.

The divine plan of history depends on the obedience of many more actors: a father who prayed the Rosary, a mother who took her son to church despite an alcoholic husband, and a grandmother who taught the faith to her grandson in secret. This book is a perfect reminder that the Lord changes the lives of millions and the course of history with the obedience of small people.

Every Catholic who is discouraged with our times should read this unlikely story of the Pope, the President, and even the Chairman, and once again remember what St. John Paul said: “The only true freedom, the only freedom that can truly satisfy, is the freedom to do what we ought as human beings created by God according to his plan.”

Bishop Barron expresses ‘great gratitude’ for his appointment to Winona-Rochester

Cardinal Mindszenty and the recovery of heroic Christian virtue

Many voices in the contemporary Church call for Christians to “accompany” and “dialogue” with those opposed to the Gospel message and ethos. All too often, this becomes accommodation with the spirit of the times. This […]