There have been countless books written on the history of the Church, some of them more valuable and useful than others. A recent book from Dr. Ryan N.S. Topping, titled The Gift of the Church: How the Catholic Church Transformed the History and Soul of the West (TAN Books, 2018) is a worthy addition to any collection of Church histories. 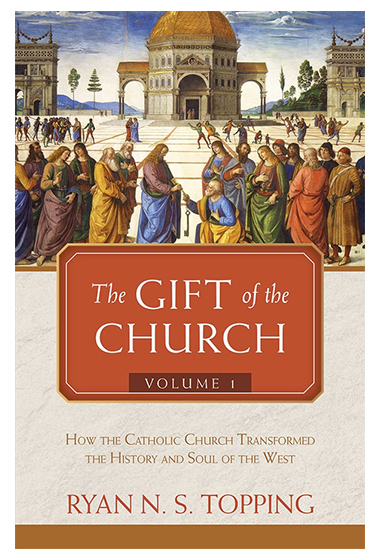 This book is the first of two volumes, and gives a survey of 2,000 years of Church history. Saints and sinners, popes and laypeople, monks and scientists and mystics—Topping looks at the course of Church history through the stories of many figures down through the years. The second volume, still to come, will look at how the Church has transformed particular domains, including music, painting, architecture, literature, and the home.

Topping is a native of Saskatoon, Saskatchewan, in Canada. He has published on many topics in many journals, and written several books.

Topping recently spoke with Catholic World Report about his book, and why is it important to study the history of the Church.

CWR: Tell us how the book came to be.

Dr. Ryan N.S. Topping: This book had a long gestation period. Prior to my conversion, the philosophy and literature of the Catholic world had long attracted me, but it was its fleshiness, if I may use such a term, that drew me in. As a Mennonite, I already confessed the Creed—or most of it. But belief, in the Christian world that I grew up in, stayed mostly in the head and heart. For Catholics, faith needs a public expression, it needs to be embodied. The Eucharist, for one, requires that Catholics reckon with and draw out the implications of how the Incarnation remains with us still. Christ’s presence does not follow a 2,000-year absence. History therefore matters. Catholic culture therefore matters. The flesh and blood Church-in-time therefore matters. When I was a teenager, and then again during my 20s, my experiences studying in Europe opened me up to the history and culture of the faith. This book has given me an opportunity to share with others something of that beauty I experienced.

CWR: Have you long been passionate about the history of the Church?

Topping: Mennonites love to tell stories about their past. They were persecuted from all sides of the Protestant-Catholic divide during the 16th century. Stories of the early Church, and especially stories from the Reformation, were often talked about when I was a teenager. My wife’s Mennonite grandparents escaped from East Germany as the Berlin Wall was rising. So, I have always had a love for the stories of heroic Christians. Once I went to college, though, my circle of stories grew. I realized there was much more to Catholicism than the few caricatures—say, of the Galileo affair, of the corruption of medieval clergy—which my early formation had offered. As I continued to study, I became familiar with the saints, and not only with the saints, but also countless individuals and families of faith who have helped to shape the West, and make the world more beautiful.

Topping: There are two reasons. The first is a benefit we can gain from reading any well-crafted history, and not only by reading the history of the Church. History, like literature, forms our moral imagination. The stories we encounter through the past both broaden and sharpen our vision of human nature. Prudence requires experience. As we become intimate with the trials and triumphs that others have had to face, we can become more wise in confronting our own. A second reason is more particular to Church history, or better, any place where Christianity has flourished. History is not only the unfolding of the deeds of men; it also gives an insight into the workings of divine providence, a work whose fruits we call “tradition.” To ignore this treasury, to be ignorant of God’s specific manner of shaping and crafting the thought and action of his people, is to become impoverished. A banquet of examples, institutions, prayers, art, customs, and philosophy, awaits!

CWR: Do you think that western society has lost something important by losing the appreciation for what the Church has meant down through the centuries?

Topping: Our time is plagued by amnesia. We have become a people largely forgetful of our past and therefore we face the future, increasingly, without the benefit of gratitude, or hope. The rule of law, the dignity of the person, the freedom of religion and speech—to take only a cluster of related examples—are all gifts bequeathed to our civilization because of the Roman Catholic Church. As we reject traditional faith, we lose the basis upon which these pre-political goods are grounded. Many of the blessings we in the West, and in North America in particular, have long taken for granted are vanishing. We should not be surprised. When God is gone, goodness is going. So, for those who wish to help rebuild a sane civilization, who wish to rebuild a culture of life in our day, the history of the Church is a great gift. Indeed, even non-believers, who nonetheless wish to retain these goods of Christian civilization—like political freedom, like humane learning, like compassionate medicine, like the experience of leisure and festivity—are increasingly recognizing that postmodern philosophy is a philosophy of death and that they need to look for other resources to help shore up our institutions.

CWR: Some episodes of Church history are challenging to face, as Catholics. Were there any parts of the book you found particularly difficult to write, because they were maybe not-so-proud moments for the Church?

Topping: Yes, certainly. The Church is big and her history is long. What I offer in The Gifts of the Church is an episodic history. Each chapter takes up about 200 years of Western history and locates one or two or three particular and enduring gifts that the Church has developed in each period. This way of limiting the discussion meant that I could obviously only focus on key events. Still, it is true, some parts of Catholic history are difficult to comprehend. I do not find, for instance, the Crusades—a very complex set of engagements between Europe and Islam over many hundreds of years—particularly difficult to justify, theologically or morally, even though there are some dark moments here. At some times in the Middle Ages, the Church’s position on judicially sanctioned torture is, I think, regrettable. Not all missionary engagements were successes. The papacy has at times been deeply compromised. Mostly, though, what the honest historian finds is, I think, the persistent presence of grace. In nearly every sphere of human activity, wherever the Church has been allowed to flourish, culture has been improved. This is evident in the realms of science, of law, of education, of agriculture, and of family life.

CWR: Over the course of writing the book, did you discover anything particularly surprising?

Topping: I gained a deeper understanding of the profound obstacles that missionaries and native peoples face upon first meeting. After studying more deeply, particularly the Church’s first contact with American Indians, I was amazed at how successful the missions were despite many human failings. When Europeans came to the New World, what they discovered was both grandeur and moral poverty in the peoples they encountered. When the Europeans arrived, the native peoples received the Gospel, but also felt the new edge of a sharp sword. Despite contradictions, God was at work in this encounter. We can see this most dramatically in Our Lady’s direct intervention at Guadalupe in 1531; this visitation alone helped to bring some 10 million Native Americans into the Church—roughly, I might add, the same number that abandoned the Church during the Protestant Reformation.

CWR: What are you trying to accomplish with this book? Who are you hoping to reach?

Topping: I hope this book will embolden some to face the future of the Church and of the West with greater confidence. Our intellectual class increasingly has become overwhelmed by narratives of suspicion, that is, we’ve uncritically accepted Nietzsche’s critique of reason. No doubt, history is full of scoundrels. Plainly, men and women are often motivated by material “interests.” Yet our history is also replete with moments of grace. Christian history overwhelms us with examples of men and women who, inspired by the Spirit, offered something that helped renew the world. We are all beneficiaries: the birth of the universities (13th century), hospitals (14th century), Renaissance and baroque art (15-16th centuries), natural science (17th century), widespread life-insurance schemes (19th century), the fall of communism (20th century), etc., etc., could never have come about except for the Church’s leavening work in our midst. None of us should have to struggle through life without knowing our fathers and mothers and cousins. My hope is that this book can offer readers an experience akin to attending a family reunion. Under this grand tent live sinners, but also the most beautiful words and deeds of the saints.

CWR: This book is volume one. How many volumes are planned, and what will the focus of those volumes be?