Homer’s Odyssey, if anything, is about that love of home which motivates and sustains the indomitable hero Odysseus, “the man of many ways.”  To get back to his native Ithaka following the Trojan War Odysseus must battle ravenous monsters, dodge the wrath of an angry sea-god, and resist the charming power of the bewitching Sirens. In the land of the marvelous, hospitable Phaiaikians, however, he gets a chance to rest.  After introducing himself to his Phaiaikian hosts he goes on to explicitly testify to the power of the hearth, explaining why he not only declined to stay with the witch-queen Circe, but even turned down the immortality offered him by the alluring nymph Kalypso. 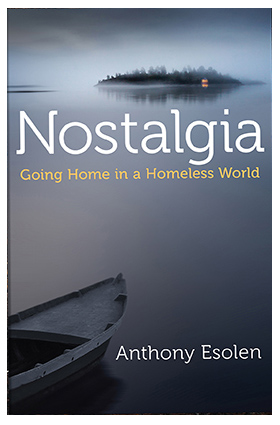 I am “Odysseus son of Laertes, known before all men for the study of crafty designs,” Odysseus tells the Phaiaikian king.

I am at home in sunny Ithaka.  There is a mountain there that stands tall, leaf-trembling Neritos, and there are islands settled around it, lying one very close to another.

There is Doulichion and Same, wooded Zakynthos, but my island lies low and away, last of all on the water toward the dark, with the rest below facing east and sunshine, a rugged place, but a good nurse of men; for my part I cannot think of any place sweeter on earth to look at.

What motivates Odysseus, explains the prolific Anthony Esolen in his new book, titled Nostalgia: Going Home in a Homeless World, is “the algea for the noston:  pain for the return, ache for the homecoming.”

This pagan association with homecoming may partly explain why many 21st-century Christian intellectuals have for all intents and purposes renounced the claims of home and native land, claims they identify as incompatible with man’s status as a pilgrim in this world.  Yet as Esolen argues, our supernatural yearning toward heaven is itself rooted in our natural, God-given love of home. And this love is as vividly epitomized by the French peasants praying the Angelus in Jean-Francois Millet’s famous painting as it is by Odysseus’s quest to return to his house and family.

To remember our history, Esolen continues, is to participate in the “playing out” of what it means for the Word to be made flesh.  Such participation depends in no small part upon our deep familiarity with particular places, a familiarity that has dwindled under the influence of mass-culture:

If I wander across the battlefield at Gettysburg, I may pause at a memorial to this or that army from the North or the South and say, “These men offered their lives here,” or I may climb the rise upon which Pickett’s men sacrificed themselves in their desperate charge.  And such memorials, and such thoughts, are cultural, properly speaking.  We ought to have more of them, not fewer, and everywhere, not only in places thick with the traffic of tourists.

It should be added that mass-culture is not the only culprit behind millennial amnesia.  At least as much harm has been wrought by revolutionary leftist iconoclasm, at the bottom of which lies nothing less than the desire to erase the concept of home as such.  To his credit, and in contrast to those who prefer to look the other way, the pugnacious Esolen proclaims upfront that fights over old statues and memorials involve everyone, including Catholics, whether we have the stomach to admit it or not:

Last year an Episcopal church in Virginia removed a plaque commemorating Washington, who sometimes worshiped there.  What the church did with crowbars, the school does with textbooks – the ones they use, and the ones they have sent to the dumpster.  Our craze of icon-smashing is like the spike of a fever the patient has been suffering for a long time.  Good but flawed men like Robert E. Lee are tarred and feathered long after death and without any inclination to see them as fallible human beings who tried to do what they thought was right and who risked all they had for it.

That a Nietzschean “transvaluation of values” has been imposed upon Catholics by outside influences is obvious, since even Esolen’s guarded remarks on behalf of General Lee are today liable to prompt discomfort, embarrassment, or perhaps even indignation in many Catholic circles.  We have surely come a long way since the time of Chesterton, to say nothing of Lord Acton, and can only pray that the fever will soon break.

As Esolen makes clear, true nostalgia has little to do with moonlight and magnolias, a “misty-eyed adulation of an imagined time that never existed,” but instead reflects a desire to return “to the journey, the pilgrimage”—and those who would question its metaphysical significance are invited to consider the effects of the 1960s upon Catholic life.  Progressives insisted that once the Church’s supposedly reactionary inheritance was liquidated, the world would come flocking to the novelties which could be put on offer.  Much was indeed liquidated, but the incorporation of second-rate folk and hippie music into the liturgy has yet to generate the promised wave of innumerable converts.  Now, even as Catholic communities continue to wither and apostasy becomes more and more common, Catholic progressives still tenaciously resist any attempt to reexamine the assumptions and policies which brought about such a sorry state.

Esolen has his own theory about all this:

I used to wonder why such colossal destruction of parishes, schools, and religious orders, and cultural influence has never caused the revolutionaries to reassess their ends and means.  But I was reckoning on normal human beings with ordinary passions and ordinary views of the human good, let alone the divine.  I assumed that if you invented a new kind of bridge, and it collapsed under the weight of cars and trains, sending people to an easily preventable death, you would hang your head, acknowledge your error, and leave bridge-building to wiser and more experienced heads.  I had not reckoned on the rage to destroy, a deep-seated hatred of what is, and an inverted “religious” passion for a never-to-be-realized ideal, usually described in terms of absolute equality and requiring absolute and central control over every feature of human behavior and thought, a vast and secular anti-church or pseudo-church.

For the progressive Catholic, there is always a silver lining of sorts.  Just as an unlimited influx of illegal immigrants is supposed to make up for the abortion of natives and gay “marriage” makes up for rampant divorce, so too does the fact that most Catholic schoolchildren know no Latin or relatively little theology make up for the fact that more and more of them leave the Church.  If the pews are empty, at least the new buildings look surreal, postmodern, and alienating.

Of course, the word progressive really should be placed in scare quotes, for if anything the Catholic “progressive” is trapped in the 1960s, and is utterly clueless about the powerful pull of roots and heritage, a pull which only grows stronger as modern life grows more alienating.  It is this pull rather than the siren-song of novelty which has led to many actual conversions in recent years, prompting as it does an interest in the claims of the Faith. The real progressives are those who progress within the Christian tradition, as they seek their ultimate home.