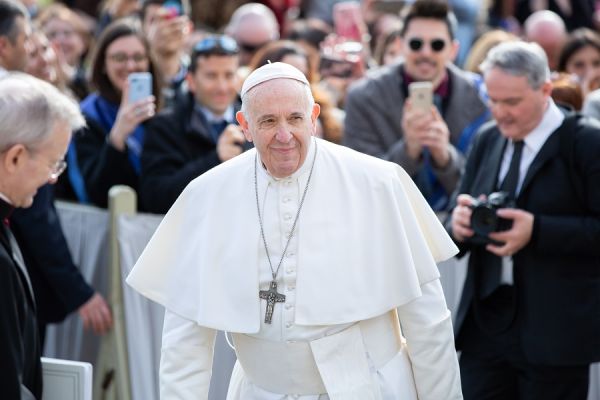 “Despite the barrenness which sometimes marks our existence, God has patience and offers us the possibility of changing and making progress on the path of good,” the pope said March 24.

However, the chance for conversion is not limitless, he said. “We can rely heavily on God’s mercy, but without abusing it. We must not justify spiritual laziness but increase our commitment to respond promptly to this mercy with sincerity of heart.”

In his address before the Angelus, the pope reflected on the call to conversion, as depicted in the parable of the fig tree in the day’s Gospel.

In the parable, a man decides to cut down a fig tree in his vineyard because it has not produced any fruit in three years, and he does not want to expend the resources of the land on this barren tree.

But when the man speaks to the farmer who works in the vineyard about cutting down the tree, the farmer asks him to wait one year more and that during that time, he will cultivate and fertilize the land around the fig tree so that it may have the possibility to bear fruit in the future.

“What does this parable represent?” Francis asked. The owner of the land represents God the Father, and the farmer represents Jesus, while the fig tree “is a symbol of indifferent and arid humanity,” he said.

Like the farmer, Jesus intervenes on behalf of humanity, asking for a little more time for “the fruits of love and justice” to grow.

“The fig tree that the owner of the parable wants to uproot represents a barren existence, without fruit, incapable of giving, of doing good,” he said. “It is the symbol of one who lives for himself, satisfied and calm, laid down in his comfort, unable to turn his eyes and heart to those who are close to him and find themselves in a state of suffering, in a state of poverty, of discomfort.”

This state of “spiritual barrenness” is countered by the great love of the farmer for the fig tree, he stated. “He has patience, he knows how to wait, he dedicates his time and his work to it. He promises his master to take special care of that unhappy tree.”

Francis explained that this parable “manifests the mercy of God,” which gives us time for conversion.

“God is the Father and does not extinguish the weak flame, but accompanies and cares for those who are weak so that they may be strengthened and bring their contribution of love to the community,” he said.

Lent, in particular, is a time in which the Lord invites his children to conversion, he said, adding that, “each of us must feel challenged by this call, correcting something in our lives, in our very way of thinking, acting and living relationships with others.”

“We can think in this Lent, what should I do to get closer to the Lord?” he said, adding to not be tempted to put conversion off until “next Lent,” because no one is guaranteed another year.

“Each of us, think today: what should I do before this mercy of God that awaits me, and that always forgives? What should I do?” he asked.

He concluded by asking the Blessed Virgin Mary to help Catholics live Lent “as a time of spiritual renewal and trusting openness to the grace of God and to his mercy.”

After the Angelus, Pope Francis prayed for the success of the discussions underway in Nicaragua since the end of February and focused on resolving the “serious socio-political crisis facing the country.”

“I accompany the initiative with prayer and encourage the parties to find a peaceful solution for the good of all as soon as possible,” he said.

Francis also recognized the Church in Italy’s celebration of the “Day of Remembrance for Missionary Martyrs” and the many bishops, priests, religious sisters, and lay faithful who have been victims of violence.

It is “a duty of gratitude” for the whole Church to remember the sacrifice of those killed for their faith in Jesus, even in these times, he stated.

Recalling recent attacks in Nigeria and Mali, the pope also prayed a ‘Hail Mary’ for the dead, the wounded, and their families, and for the conversion of hearts.

In improvised remarks after reciting the Angelus, the p… […]

Letter from Benedict XVI reveals the ‘central motive’ for his resignation, biographer says

Pope Benedict XVI revealed in a letter to his biographer that insomnia was the "central reason" why resigned in 2013. / Paul Badde/CNA