Montreal, Canada, Mar 23, 2019 / 03:19 pm (CNA).- Father Claude Grou is out of the hospital and grateful for the groundswell of support he received after he was stabbed by an assailant while celebrating a televised Mass at St. Joseph’s Oratory in Montreal Friday morning.

The 77-year-old priest said in a statement that the words of support he had received “warm my heart and allow me to contemplate these difficult moments peacefully.” He said he was in good health and still processing the Friday attack, CBC News reports.

Celine Barbeau, a spokesperson for the oratory, said the priest will grudgingly take a few days’ break.

Though he needs a few days, he is in “a very good state of mind,” said Barbeau.

“And actually he’s eager to go back to work. We have to hold him back,” said the spokesperson.

Grou was standing behind the altar for daily Mass with about 60 congregants in the oratory’s Crypt Church when he was rushed by a man in a baseball cap, who stabbed him.

Authorities detained a 26-year-old suspect they said is known to police.

The priest, who is rector of the shrine, was taken away by ambulance. Montreal police said he suffered upper-body “lacerations.”

Adele Plamondon was finishing the day’s reading when the assailant stood up from the pew.

“I saw this man coming quickly and taking his knife out and going straight for Père Grou,” she said, according to CBC News. “It was obvious what his intentions were. So, I left screaming to alert the security.”

“Father Claude Grou, Canadians are thinking of you and wishing you a swift recovery,” Prime Minister Justin Trudeau said on Twitter the day of the attack.

"We are all shocked by this act of violence that has taken place in our city, in a space dedicated to peace,” Archbishop Christian Lepine of Montreal said in a statement.

“We know that places of worship of many religions are targets of acts of violence,” the archbishop continued. “We must continue to follow the path of peace and love, believing that good will overcome evil through prayer and good works.”

Construction on the mountaintop oratory was finished in 1967. Its dome is visible from across Montreal. It is the largest shrine dedicated to St. Joseph in the world, with about two million annual visitors.

St. Andre Bessette, a Holy Cross brother devoted to the poor and sick, had built a chapel to St. Joseph on the site with help from friends and money he received from giving haircuts to students. He spread devotion to St. Joseph and the brother’s prayers were believed to be especially effective in working miraculous cures, drawing many visitors.

Larger versions of the chapel were built as more and more visitors came. When he died in 1937, over one million people attended his wake and funeral.

Brother Andre was canonized under Pope Benedict XVI in 2010. 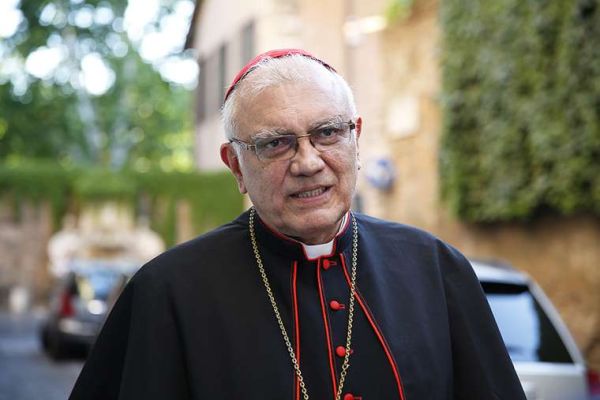 The Venezuelan bishops’ Justice and Peace Commission pointed out that more than 30 representatives of the National Assembly are not exercising their functions because of the violation  of their parliamentary immunity, while others have been arrested, are in exile, or their election was invalidated as occurred with the representatives from Amazonas State.

The bishops’ conference has asked the authorities to respect the will of the people. They also demanded  that “the security of persons that are the object of persecution and intimidation be guaranteed.” Santiago, Chile, Jan 23, 2018 / 07:00 pm (CNA).- A dog named Rambo lived up to his “action hero” name, when his barking alerted sleeping religious sisters that a chapel next to their convent was on fire.

In the early morning hours of Jan. 20, a fire destroyed the Virgen de la Candelaria Chapel in the town of Calafquen, Chile, next to the home of the Carmelite Missionary Sisters. Police suspect the fire was caused by arson.

Fr. Alejandro Gutiérrez is the pastor of San Sebastián Parish, which includes the chapel. The priest told Radio Bio Bio that the sisters’ house “is attached to the church. A much greater tragedy could have happened there. If  the dog’s barking hadn’t alerted them, the fire would have spread to the convent and we would be grieving over a much more serious incident.”

Gutiérrez explained that the chapel was 80 years old, and the sisters there worked mainly in education.”

“This just creates a new opportunity to continue serving Jesus Christ and to strengthen our faith,” he priest  said.

Sources told ACI Prensa that around 3:30 in the morning, a group of masked arsonists broke a window in the rear of the Church, and threw a fire bomb inside.

Four companies of firefighters arrived on scene to fight the flames. With the help of the neighbors they were able to keep the fire from spreading to the nuns’ convent.

The Panguipulli fire chief, Rodolfo Zúñiga, told Cooperativa Radio that the electricity to the church was shut off at the junction box, so the fire was probably caused by a third party.

“Unfortunately for our town, as residents of Panguipulli, [arson] is already becoming routine, the situation is lamentable, but once again today we had one of the most beautiful chapels in the area reduced to rubble,” the fire chief said.

The Carmelite superior, Sister Maria Daniela, told Radio Bio Bio that she believes the fire was intentional, though the sisters had not received any kind of threats.

“We are women of peace. This is an oasis of peace,” the religious explained. “I never would have imagined that people would come and do something bad.”

Sister Maria Daniela sent a message to those responsible: “you need to place yourselves in the presence of God. It’s sad to know that there are people dedicated to doing evil, because the world does not progress with evil.”

Two other churches in Panguipulli were also recently attacked and two received threats, including the town’s main church.