It’s time to admit we’re addicted to outrage. Other people are just so darn wicked. Or liberal. Or racist. Or tacky. Our political leaders know how to channel this outrage into power for themselves. Our media and entertainment industry spins it into gold. The comboxes of motherhood forums are worse than the fifth circle of Dante’s hell. And yet we eat it up. 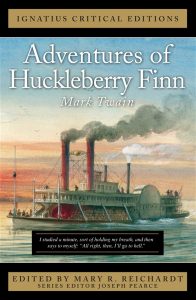 If we’re honest with ourselves, it’s because moral outrage feels so good. When I’m riding that train, I can forget about my own failings for a while and take some real pleasure in being righteous and right. It’s one of the devil’s more successful tricks, perverting our very sense of right and wrong into an occasion for sin. For it leads us right into the deadly—yes, deadly—sins of wrath and pride. So how do we avoid this snare, especially when there is so much to be outraged about?

If you’ve ever read anything I’ve written before, you won’t be surprised when I say that the answer lies in one of my favorite books: this time, it is Mark Twain’s Adventures of Huckleberry Finn. In a great scene in the novel, Huck encounters a couple of really bad guys, and responds in a startling way—by recognizing his own potential self in them. In the same way, Twain challenges us to see our own capacity for evil, and therefore to respond to others not with self-righteous outrage, but with mercy.

The scene occurs along Huck’s epic journey down the Mississippi River. He and the escaped slave Jim find a wrecked steamship, and climb on board to explore. But our heroes find that they’re not alone: two criminals have a third man tied up, and plan to leave him on the sinking ship, as a quiet and sanitary means of murder.

Twain lends a dark humor to the casuistry of the crime. One of the men insists that leaving their victim to drown will be better than murdering him: “I’m unfavorable to killin’ a man as long as you can git aroun’ it,” he says, “it ain’t good sense, it ain’t good morals.” It’s twistedly funny, but also apropos: all throughout this great American novel, Twain makes Huck navigate between competing voices about “good morals,” and in this moment our adolescent adventurer chooses rightly.

Listening on in horror, Huck and Jim plan to set the men’s boat adrift, removing their only means of escape, so that Huck can call the sheriff. But when they find that their own raft has floated away, they steal the criminals’ boat in a panic, leaving the murderers stranded on the foundering steamship. Yet rather than cutting his losses and making his way to safety, Huck pauses to reflect:

Now was the first time that I begun to worry about the men—I reckon I hadn’t had time to before. I begun to think how dreadful it was, even for murderers, to be in such a fix. I says to myself, there ain’t no telling but I might come to be a murderer myself yet, and then how would I like it?

Here Twain creates an amazing moment for Huck, where the boy perceives other people—even murderers—through the lens of empathy, imaginatively placing himself in their shoes. Not only does it show a remarkably honest humility (for who among us can claim to be truly incapable of murder?) but it also moves him to mercy: he alerts a nearby ferryboat to arrange a rescue for the men. Huck does, paradoxically, apply both justice and mercy. Once apprehended, these men might go to jail or be hanged by a judge, but Huck won’t knowingly let his fellow men drown in an accident, no matter how wicked they are.

It’s not until later that Huck realizes he has also fulfilled an ideal of Christianity. Remembering the pious Widow Douglas, Huck muses, “I judged she would be proud of me for helping these rapscallions, because rapscallions and dead beats is the kind the widow and good people takes the most interest in.” Even when Huck sees that the ship has sunk, he paddles around the wreck, looking for survivors, but finds none.

Twain, who had a complicated, and even strained, relationship with Christianity, nevertheless makes Huck enact a version of Christ’s words in the Gospel of Matthew: “Do to others as you would have them do to you.” Yet Twain’s version of the Golden Rule makes us a little uncomfortable. It’s a lot easier to apply to nice, tidy good people because that’s how we like to think of ourselves. We tend to hesitate to apply Christ’s words to anti-Semitic celebrities, sex addicts, or even to the ideologues across the political aisle. But Huck takes a frank look at murderers and sees that he could very well be them. I think Twain wants us to do the same.

In literature, a geographic journey often represents a moral journey, and Huck still has a long way to go. Raised in a racist slaveholding society, Huck has not yet extended the Golden Rule to its logical conclusion—to treat the black slave Jim as a fully human being. This he will eventually do. But the episode of the sinking steamship represents a step along his—and our—moral odyssey in the novel.

In his masterful novel, Twain challenges readers of every generation, then, to follow Huck’s lead and to treat our fallible fellow men with mercy. The culture of outrage will only cause us more problems, and may even cost us our souls. Even—and perhaps especially—facing the flaws and conflicts of our greedy and violent society, we should remember that we might come to be murderers ourselves someday. And then, we should ask along with Huck, how would we like it?

Our Christian goal ought to be nothing short of Heaven – not escaping Hell by the skin of our teeth, nor being resigned to “doing […]

Our Lady, Easter, and the month of May

Throughout the history of the Church, many believers have expressed surprise that the four canonical Gospels make no mention of the Risen Lord’s appearance to His holy Mother. Some might reply that there would be […]