British writer Fiorella Nash is a pro-life feminist. Her latest book, The Abolition of Woman: How Radical Feminism Is Betraying Women (Ignatius Press) is the result of ten years researching life issues from a feminist perspective. A passionate defense of her position, the book is as controversial as it is well-argued in exposing and confronting the hypocrisy behind mainstream feminism’s continuing support for the multi-million dollar abortion business. 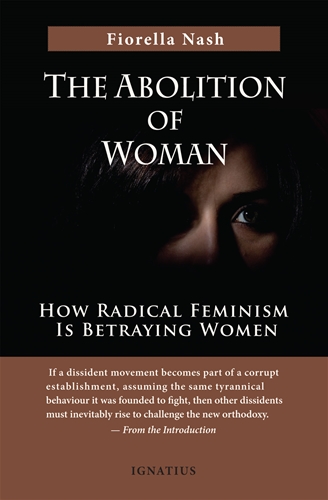 Recently, from her home outside London, Nash spoke to Catholic World Report.

CWR: You describe yourself as a ‘pro-life feminist’ – what exactly does that term mean?

Fiorella Nash: It really means exactly what it says. I am 100% pro-life, in that I believe in protecting human life from conception to natural death, and I am 100% supportive of the continuing struggle for equality between men and women. Like other pro-life feminists, I see abortion as a form of exploitation and a sign that contemporary feminism has lost its way. No social justice movement should be built on the blood of the innocent. I don’t believe we can fight for women’s lives to be valued and protected if we actively promote the killing of others.

CWR: What has been the reaction to your message from other feminists?

Fiorella Nash: Very mixed. A small number of open-minded feminists are actually prepared to listen, even if they don’t agree with me, and the results are very positive. …  For the most part, though, the response has been predictably hostile: protests, inflammatory articles in student newspapers, students trying to convince me that I’m a religious fanatic or have some deep-seated psychological hang-up, activists who invite me onto their talk shows to shout me down, have a good shriek and scowl at me across the microphone. I’ve even been likened to an ISIS terrorist!

In a way though, it makes my point for me. If we’re not mature enough to discuss the issues in a respectful and intelligent manner, we’re simply playing into the hands of misogynists who treat us like children.

CWR: So you are viewed with suspicion in some quarters?

Fiorella Nash: [Laughs] That’s one way of putting it! I’ve had protests and walk-outs from individuals on both sides of the debate. Pro-aborts tend to be more aggressive and spiteful in their attacks, whereas I have to admit that the resistance I have had from the pro-life side has been much more muted and generally more constructive. Apart from a few men patronizingly dismissing my position or trying desperately to convince me that I don’t really believe in all this “femmy stuff”, the concerns I have heard from the pro-life side tend to be genuine worries about going anywhere near feminism at all.

Having said that, I have been overwhelmed by the interest and support given to the book so far, even by groups who might normally view the subject with suspicion.

CWR: In The Abolition of Woman you call on all feminists to account for their silence around the subject of abortion. What do you mean by this?

Fiorella Nash: Abortion has become almost a matter of dogma within mainstream feminism and the obsession with defending and promoting abortion at all costs has led to the injustices to women caused by abortion being ignored or even justified. I look at injustices all over the world, such as forced abortion in China, gendercide in India and the aggressive promotion of abortion in developing countries in the name of maternal health, but I also draw attention to injustices much closer to home. Whilst feminists are marching in their pussy hats and handmaid’s tale costumes, monsters like Kermit Gosnell are protected by a protracted media silence and ‘brave’ feminists are bullying and silencing women who question the abortion ideology.

CWR: What do you think is the common ground, if any, between pro-life feminism and mainstream feminists?

Fiorella Nash: I think that there are many issues of mutual concern, too many to list. For example: child marriage, FGM [female genital mutilation], intimate partner violence, trafficking. One hundred years after Britain gave some women the vote, women around the world still face many challenges and hardships which all people of good will should be coming together to change.

CWR: What do you see are the challenges ahead for pro-life feminism?

Fiorella Nash: How long have you got? We need to be more vocal and more prepared to stand our ground. I was delighted to hear that when a pro-life feminist group was banned from a Women’s March last year, they turned up with their banners anyway. We cannot allow ourselves to be silenced by bullies who claim to speak in our name. Beyond that, there is a huge need to talk about pregnancy as experienced by millions of women. We spend so long talking about the extreme cases that we do not always talk candidly enough about the everyday challenges facing pregnant women – sickness, employment problems, poor maternity care, isolation in the face of family break-up. But first and foremost, we need to be a vocal, visible presence within the broader debate.

CWR: Why did you decide to write this book? And why now?

Fiorella Nash: I have been working up to this for a long time. I first put pen to paper on the subject of pro-life feminism with an article in a British Catholic journal nine years ago and I was completely unprepared for the response. There was some negativity – a patronizing telling off from one reader “we don’t want to be backing these silly ideas…” and a demand that I desist, an admission by someone else that her husband had responded to my article by flying into a temper and shouting large quantities of foul language about me. However, the response was overwhelmingly positive and I started to write and lecture on the subject of pro-life feminism at conferences and universities. The book is the culmination of years of research, university talks, and debates on the different life issues. I certainly couldn’t have written the book without the support of my colleagues at the Society for the Protection of Unborn Children.

CWR: You are known primarily as a novelist, was it hard changing gears and crafting a work of non-fiction?

Fiorella Nash: It was certainly challenging getting back to academic writing but, alongside my creative writing, I have been a researcher in this field for years. I think the biggest challenge was ensuring that every single point I made could be backed up because the abortion debate is such a contentious field that the other side will pounce on absolutely anything to try to discredit an argument they don’t like. In the end, this was probably a good thing because it forced me to be very thorough in my research, when if I had been writing on a popular subject, there might have been a temptation to cut corners.

CWR: What do you hope to achieve with the publication of The Abolition of Woman?

Fiorella Nash: It’s very trendy at the moment to talk about taking people out of their comfort zones. In a sense, that is what I am trying to do with this book. Challenge people’s assumptions and ask readers to look beyond the slogans and the jargon that have come to typify the abortion debate. I also hope that the information in the book, particularly on lesser-known subjects such as commercial surrogacy, may be of use to those who have an interest in life issues.

CWR: Are you hoping to write more on the subject of pro-life feminism?

Fiorella Nash: I am still writing and speaking on the subject but I hope to have the opportunity to write another book in the future.