The tension between Church and state is never fully and finally resolved, and in fact, never can be. When conscientious citizens must stand with the Church against the worldly exigencies of the state, invaluable guidance is found in the transcendent example of Thomas More. His life, and especially his conflict with King Henry VIII, are always worthy of careful consideration. Louis Karlin and David Oakley, two practicing lawyers, examine More’s life and work with insight in their taut volume, Inside the Mind of Thomas More: The Witness of His Writings. They illumine, with masterly concision, the legal mind and exceptional moral core of one of the defining figures in all of Western history. 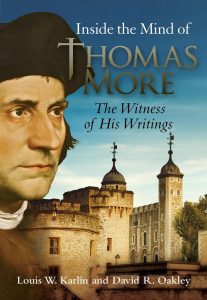 Born in 1478, More was baptized into the Catholic Church and the thoroughly Catholic world of late medieval England, which was perhaps the most Catholic country in Europe at the time. This world of Christendom is where More flourished. It was of course a world that was shattered in the early 16th century, first by Martin Luther and then by a flood of Protestant revolutionaries. In response to what he viewed as a moral and civilizational catastrophe, More became a ferocious polemicist against Protestantism and a prosecutor of its adherents. Oakley and Karlin add invaluable perspective for the modern reader on More’s conduct and thinking in this area. Heresy was rightly seen as a menace to the social order and a threat to souls; More’s conduct toward heretics was in conformity to the law that required suppression of heresy. Any notion of religious liberty as we see it today was nowhere to be found in More’s age.

More’s rise and fall under Henry formed the central drama of his life. A trusted, extraordinarily competent counselor in Henry’s court—indeed, More ultimately became Lord Chancellor of England—he broke with Henry over the King’s “great matter,” that is, his divorce from Catherine of Aragon and marriage to Anne Boleyn. More’s ingenious, nuanced defense of his position was maintained until all room for maneuver was eliminated. His conscience would not finally submit, in the form of the Oath of Succession, to Henry’s usurpation of the authority from what More had always referred to as the “common knowen catholyque church” and the truth and tradition it incarnated.

Karlin and Oakley are especially lucid in their explanation of More’s legal defense and his ultimate reliance on conscience. More was of course a very learned and competent lawyer, and he adroitly used the law to protect himself throughout his conflict with Henry. The civil law was relentless in its pursuit of More’s submission to Henry’s supremacy over the Church, and More was able effectively to use silence to resist its reach—until silence would not suffice.

That left conscience as his bastion of what became an essentially solitary resistance. Karlin and Oakley clarify that conscience rightly understood has objective and subjective components. In our time, the subjective aspect is all that seems to matter—a common error embodied in Robert Bolt’s very fine play, A Man for All Seasons. But as the authors rightly argue, conscience “is not simply an exercise of personal autonomy.” Conscience objectively seeks to conform to the truly just and good, and subjectively must be the working of individual judgment in a particular situation. Only with both aspects can it function as what John Henry Newman would later call the “aboriginal Vicar of Christ.” It is this understanding that Karlin and Oakley have in mind when they write the plain truth that “More died for conscience.”

Karlin and Oakley astutely identify the source of More’s heroism:

So how did More achieve this freedom and courage of heart? The short answer is that More was a saint—or, more accurately, struggling for holiness—before he was a martyr. He ordered his loves; he cultivated one love above all others, the love of God. To achieve this state of ordered loves, he maintained a robust spiritual life—prayer, penance, and sacraments—which aimed at constant growth in love of God. He practiced daily meditation, attended daily Mass, and went to weekly confession. At Chelsea, he constructed New House, which included a chapel. His penitential practices followed those lived in the strictest monasteries of his day, which included a hair shirt that he discreetly wore under the clothes befitting his high station in life.

In light of the distortions introduced into popular culture about More by Hilary Mantel’s fictional depictions of the period, such a portrait brings the true More of history back before us.

In their suggestions for further reading, which include excellent editions of More’s own works, Karlin and Oakley list Gerard Wegemer’s 2012 study Thomas More: A Portrait of Courage and Peter Ackroyd’s magisterial 1998 biography The Life of Thomas More, both of which animate this absorbing new work. It is a deeply satisfying introduction to More, who serves as an exemplar obviously for Catholics but also for all principled citizens who seek to limit the state’s ability to direct consciences. With this book, we are reminded that More was (as Erasmus famously called him) “omnium horarum“—”a man for all seasons.”