Off the south coast of England lies the Isle of Wight. It was there, in 1901, that the Benedictines of Solesmes Abbey fled after the then French government passed anti-clerical laws. Initially, the monks stayed in large house to the south of the island but soon they had set about designing and building a permanent monastic home. Quarr Abbey church was consecrated just over a decade later in 1912. 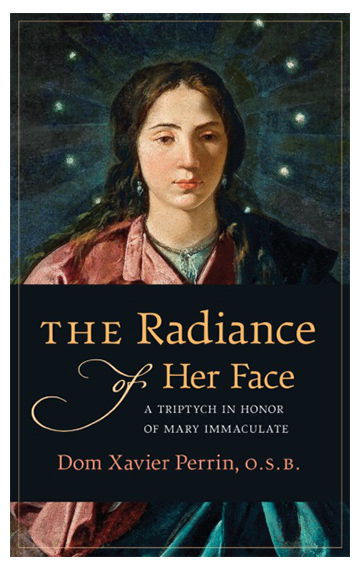 The abbey’s latest abbot, Dom Xavier Perrin, is French. He is also an author of a recently published book from Angelico Press on the Immaculate Conception titled The Radiance of Her Face: A Triptych in Honor of Mary Immaculate. This is fitting given that the writings of another Benedictine monk, Prosper Guéranger, played such a crucial role in reviving interest in the Immaculate Conception prior to the proclamation of the dogma in 1854.

On meeting Abbot Xavier, one is struck immediately by a playfulness in his manner, a lightness of touch, a ready joyfulness. This is, however, balanced by a shrewd, if always charitable, view of those whom he meets. Like many monks, he is also a scholar, having studied literature and then art in Paris before entering the Benedictine monastery of Kergonan in Brittany in 1980. Since then, his time has been spent in prayer and study living out his Benedictine vocation in community life, as novice master, choirmaster, and organist of the monastery.

Unexpectedly, a new chapter in the life of Dom Xavier opened when he was sent to be acting Prior of Quarr in 2013. As we walked in the wooded grounds of the monastery, I asked about his coming to England. He says, “It is basically the same life, in the same monastic congregation—the same monastic culture and understanding. Only the language and the country’s culture are different.”

When in France, however, he was a monk, not an abbot. I wondered, therefore, had that changed his view of the monastic calling? “It is very much part of the same monastic way,” he said. “You are abbot for the monks and with the monks, and that means that you have to face even more seriously the monastic aims. It is a great grace to be called to be abbot. It entails a call to a deeper conversion of the heart. There are dangers also which come from the responsibilities—sometimes they can be pretty great—and also from the solitude of being in charge.”

His latest book—he has written three in total—was originally published in France in 2006. It reveals the fruit of 26 years of contemplation on the mystery of the Immaculate One. Dom Xavier is clear about the role of Mary in the monastic life. “Although St Benedict does not speak of Mary, she is obviously very present in the life of a monk,” he explains. “In a sense, she is the perfect disciple of Christ. The main monastic values, such as silence, obedience and humility, are perfectly represented in Mary. In the end, I could say that Mary plays a very important role in the life of the monks, although each of us expresses it in his own way.” He went on to say something that rings true in the lives of all Christians, not merely only monks: “Like a mother, she has a personal relationship with each of her children. And always, she leads us to Christ.”

Quarr Abbey is dedicated to Our Lady. Its official title is the Abbey of Our Lady of Quarr. A shrine to Mary is found in the crypt of the abbey church. The crypt is a quiet and peaceful place, somewhat hidden from the tourists who, in summer, throng to the monastery’s public grounds outside the enclosure. In a place dedicated to prayer, the crypt shrine to Our Lady is an especially prayerful spot. The abbey is set in rural surroundings, in woods that lead to the coast and the sea beyond. By now, the abbot and I had arrived at the shore and beach that designates the end of the abbey’s grounds. We gazed out over the expanse of sea to the English coast clearly visible in the distance. Standing there, one sensed the significance at the start of the 20th century of the restoration of the monastic community at Quarr. A Cistercian monastery had existed there previously, one founded in 1132, later suppressed by Henry VIII in 1536. Its ruins lie in the grounds of the present monastery.

Today, Quarr Abbey remains a monastery of the Solesmes Congregation. Monks continue to live by the ancient Rule of St. Benedict. They continue to welcome young men interested in a monastic vocation, pilgrims and guests, retreatants and seekers, visitors and the curious; above all, they continue to live a life that is a sign of contradiction. Opposed to much that passes as important in the modern world, their life testifies to the transcendent value of God alone.

Monasteries, to outsiders, can seem tranquil places. However, to live the life within them without a divinely inspired vocation would be impossible. I ask Dom Xavier about his calling, and where his monastic journey first started.

“In my teens, I visited an abbey for the first time and discovered that it was possible for human beings to remain as much as possible in relationship with God,” he said. “I was struck by the fact and it never left me afterward. When I joined a monastery aged 22, I thought I would always regret if I did not try this wonderful vocation. I was very daunted, but at the same time found it—and still find it—such a grace to be a monk.”

Turning to his first English publication, I ask, why another book on Our Lady, and in particular the Immaculate Conception? Dom Xavier replies, “St. Bernard said ‘De Maria numquam satis’—You will never say enough about Mary. Each generation needs to state their admiration, love and gratitude to Mary with their own words. My only hope is this book is not one more bad book on Mary.”

As to why he wrote a book on the dogma solemnly proclaimed by Pope Pius IX in 1854, he says, “This mystery is not well known. It seems to set [Our Lady] apart from other members of the Church who all are sinners. It was interesting to try and understand a little better how the Church came to make such a statement on Mary, and what it means for Christians.”

There is also a personal note to the writing of this book. As Dom Xavier explains, “My own vocation was very much helped by a pilgrimage to Lourdes. I was happy to have an occasion to express my gratitude and love to Our Lady who revealed herself as the Immaculate Conception to St Bernadette.”

After a series of conferences Dom Xavier gave at his former monastery in Brittany in 2004 to mark the 150th anniversary of the proclamation of the dogma of the Immaculate Conception, one of those listening suggested that they be published. Two years later Regards sur l’Immaculée appeared in print.

On reading this book, “in honor of Mary Immaculate,” what is striking is the intensity with which it is written, both in style and content. It seems Abbot Xavier was keen to speak of an aspect of Mary too often misunderstood or even forgotten:

The bells ring out for the next office. These bells are a constant in the life of any monastery, and Quarr Abbey is no different. Soon, the abbot is once more heading to the abbey church for another service, to worship with the whole Church, and, indeed, to pray for her.

Before he left, I asked Abbot Xavier what was the greatest joy in the life to which he had been called. He paused, and then replied, “The growing, humble certitude that God loves every creature and invites you to be an instrument of His love.”

There was no greater instrument of God’s Will than Our Lady. In The Radiance of Her Face: A Triptych in Honor of Mary Immaculate, its author has given us a profound reminder of this truth.

The Immaculate Conception and the seamless garment of doctrine

Vatican I, Pius IX, and the problem of ultramontanism

John W. O’Malley’s new history of the First Vatican Council provides an impartial and detailed account that offers both historical context and insight into the […]

We should all adopt some sort of interior ‘Benedict Option’, to ensure our souls are not conformed to this age, to keep our thoughts and […]