Vatican City, Dec 4, 2017 / 10:14 am (CNA/EWTN News).- In his prayer video for the month of December, Pope Francis prays for grandparents and the elderly, urging people to respect and support them, that their wisdom may continue to be passed down to new generations.

“A people that does not take care of grandparents, that does not treat them well, has no future!” the Pope said in the video. “The elderly have wisdom.”

He also noted that the elderly have a great responsibility to pass on to others their life experiences, and the histories of their family, community and culture.

“Let us keep in mind our elders, so that sustained by families and institutions, (they) may with their wisdom and experience collaborate in the education of new generations,” he concluded.

Released Dec. 4, the video takes a more light-hearted approach than past prayer intention videos, first depicting a young man who ignores several elderly people he passes on the street.

Soon after the young man hears lively jazz music coming from a building, and upon entering, discovers the three he passed earlier all playing music together. They then invite him to join them.

The importance of the relationship between the elderly and the younger generation, particularly between grandparents and their grandkids, is one of Pope Francis’ favorite topics.

Last year in Rome he held an audience with around 7,000 grandparents, urging them to talk with their grandkids about the faith.

“And talk to your grandchildren, talk. Let them ask you questions,” he said. They may be different from you, they may have other hobbies, “they like other music… but they need the elderly, this ongoing dialogue.”

“You are an important presence, because your experience is a precious treasure, essential to looking to the future with hope and responsibility,” the Pope said at that encounter, Oct. 15, 2016.

At a special Mass in June he said that the older generation is called to be spiritual “grandparents” to young people, sharing their experiences, especially of the faith.

“And this is what the Lord today asks us: to be grandparents. To have the vitality to give to young people, because young people expect it from us; to not close ourselves, to give our best: they look for our experience, for our positive dreams to carry on the prophecy and the work,” he said.

“I ask the Lord for all of us that he give us this grace.” 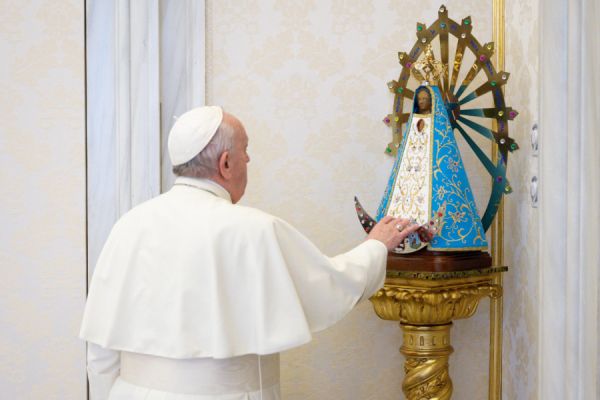 Vatican City, Dec 26, 2019 / 05:02 am (CNA).- The death of St. Stephen, the Church’s first martyr, teaches Catholics to renew their commitment to charity and self-gift, part of the meaning of Christmas, Pope Francis said Thursday.

Pope Francis: Include the Holy Spirit in art, theology