One of the greatest difficulties facing those who wish to reveal hidden corruption is that of providing irrefutable proof to verify their allegations, allegations often rest on a mix of personal observations, claims of anonymous sources and circumstantial evidence—all easily fabricated and, for that reason, easily impugned. Of course there are factors which can help us evaluate credibility: Do allegations accord with indubitable facts, or at least with what can plausibly be surmised from them? Have investigations tended to prove a whistleblower more or less correct? Was the whistleblower in a position to know the fact and does he have a character which can be trusted? 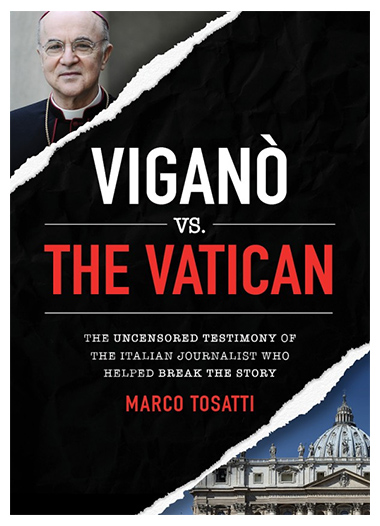 It is on this last point that Marco Tosatti builds his case in Viganò vs. The Vatican: The Uncensored Testimony of the Italian Journalist Who Helped Break the Story, a book which includes complete copies of the public statements made by Archbishop Carlo Maria Viganò from August to November of 2018, together with Tossatti’s account of how and why the archbishop chose to make such information public.

What emerges from Tossatti’s pages is the image of an archbishop concerned above all else with the supernatural purpose of the Church, with the good of souls, with his standing before God, with what is due to God. The regularity of this emphasis in Viganò’s statements is a welcome contrast to the emphasis on such issues as psychological harm done and the creation of mistrust found in the statements of even many orthodox clergymen committed to rooting out sexual abuse. Far from being the disgruntled careerist depicted by his adversaries, he is a man who puts the good of the Church over power and influence. On one occasion he turned down an offer from Pope Benedict XVI to be made prefect of the Congregation for Economic affairs (which would have brought an elevation to cardinal) because he believed that acceptance would put an end to his efforts to implement much needed reforms in the governance of Vatican City.

In contrast to this Viganò’s critics are shown to be responsible for a series of obfuscations and cover-ups, with Tossatti calling attention to many instances in which there is documentation which strengthens Viganò’s side of the case.

Does this mean that we should take all Viganò says at the final word? Obviously not. Human memories are notoriously imperfect. Even the most reasonable presuppositions can distort how even the most objective and honest of us interpret what we see and here. Unfortunately both Viganò’s sympathizers and his critics often link their assessment of him with the question of whether his allegations meet the standard of “proof beyond a reasonable doubt” necessary for a criminal conviction. Many of his statements are more like what criminal courts would consider “probable cause” for a search warrant. Some might have the substantiality which would justify an arrest and indictment. And, yes, some may be no more than the type of plausible speculations with which detectives begin investigations. Ordinarily such evidence should not be made public. Under current circumstances public pressure is needed to bring the truth to light.

It is also necessary to be clear about what Viganò is and is not trying to reveal. In some cases he is revealing the Vatican’s cavalier dismissal of allegations which ought to be investigated rather than affirming the truth of the allegations themselves. He has in such cases pointed out that he doesn’t know if the allegations are true and provides details of circumstantial evidence which gives the allegations the mix of plausibility and dubiousness which would lead to an investigations by any responsible police department (and which could not be impeded without risk of being charged with obstruction of justice). The catch-22 is that if Viganò gives the details and names necessary to verify that ecclesial officials obstructed investigations he can be accused of slandering the accused, while if he refuses to provide such information his statements can be criticized as too vague to be either credible or verifiable.

Another unfair ground of criticism is the fact of Viganò’s alignment with those who have theological concerns about the current pontificate. Like Benedict XVI, Viganò sees a strong link between rejection of definitive Catholic teaching (particularly on sexual morality) and the sexual abuse crisis. It makes sense that, as an administrator and diplomat, he would choose to focus on administrative reactions to sexual abuse while theologians, canon lawyers, church historians and philosophers to address points of theology and church law.

Using the moral misdeeds of the heterodox to undermine their credibility in conjunction with theological apologetics has been common throughout Church history. Saint have engaged in the practice, as well as in “politically manipulating” circumstances for the sake of the Church’s well-being. Saint Cyril of Alexandria, a father and doctor of the Church, knew that the heretical Nestorians’ failure to arrive at the time scheduled for the Council of Ephesus was due to the impediment of conditions beyond their control. He used the technicality to open and complete the conciliar proceedings before the appearance of the Nestorians needlessly complicated matters.

As already said, we need not—and to a considerable extent should not—take Archbishop Viganò’s statements as the conclusive end of an investigation rather than as the foundation for the beginning of one. Even leaving aside the question of the Pontifical Secret (which I leave to experts) there is room for reasonable debate about the archbishop’s prudence in proceeding as he has. But Tossatti’s book makes clear that Viganò is a sincere and devoted man of the Church, a man who was in a position to know what he is talking about, a man with whom disagreements must be charitable and respectful and a man whose claims need to be taken seriously.

Viganò vs. The Vatican: The Uncensored Testimony of the Italian Journalist Who Helped Break the Story
By Marco Tosatti
Sophia Institute Press, 2019
Paperback, 144 pages