“The intelligent farmer will first of all raise what he can for the year-round needs of his family, and then corn and hogs, or wheat or cotton, or anything else for exchange.” — Msgr. Luigi Ligutti and Fr. John Rawe, SJ

Now why, you ask, will the intelligent farmer first of all raise what he can for the year-round needs of his family? The answer of Fathers Ligutti and Rawe is: self-sufficiency. They tell the story of an Iowan mother visited by a representative of the County Relief office. The welfare worker wanted to know if the mother and her family were eating enough. The mother, who lived with her husband and seven children on a little five acre farm, then showed the social worker around the house—a house positively brimming with food. Canned vegetables, preserved meats, stored root crops, not to mention the two cows in the pasture and the 50 chickens in the coop. Yes, this family was eating very well indeed. Better than most of us reading this, I reckon. 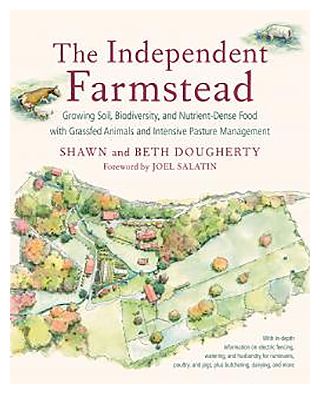 But why, you ask, was the welfare worker there at all? Because a well-intentioned neighbor had noticed that the grocery delivery truck hadn’t stopped at this family’s house for weeks.

Kindly and thoughtful neighbors indeed! But isn’t that type of conclusion a sad commentary on a terrible condition existing in the State of Iowa? There it is, with the earth’s best soil, and yet it seems to be taken for granted that the delivery wagon must furnish its people with the necessaries of life.

It is, indeed, a sad commentary. But if few families in 1940, when that passage was written, provided for themselves from their land, how many fewer do so now? Even sadder.

Fathers Ligutti and Rawe were not simply making a passing observation. Their classic book was a part of the blossoming of the Catholic Land Movement in America—a movement which, I’ll wager, is largely unknown to most American Catholics. (You can learn a little bit here.) This movement urged American Catholics to move back to the land, and to provide for themselves from its bounty. But like its sister movement in Britain, led by such luminaries as GK Chesterton, Hilaire Belloc and Father Vincent McNabb, the Catholic Land Movement did not prove victorious over the rising tide of industrialism. In fact, you might say that the Land Movements were defeated so soundly that they’ve left virtually no trace. What Catholic today even knows they existed? What Catholic today, for that matter, knows that as recently as 2006, the Petrine Office has strongly affirmed the centrality of the agrarian life to the Catholic vision? And yet, the teaching is there. As Pope Benedict XVI said, “The rural family needs to regain its rightful place at the heart of the social order.”

There are plenty of voices out there supporting agrarianism, most famously Wendell Berry. Others including  Gene Logsdon, Vandana Shiva, Wes Jackson and Joel Salatin are also doing good work. But Catholic voices have been few. One exception: Marcus Grodi. And now I bring news of another exception (or pair of exceptions): Shawn and Beth Dougherty.

The Dougherties run a small Ohio farm called Sow’s Ear. When they first arrived on their land, 20 or so years ago, they took to raising chickens and goats and veggies. But how does one raise chickens and goats? The standard model is to go to the feed store, buy sacks of feed, and provide this “scientifically formulated” industrial food to one’s animals. The Dougherties began their farming by following this standard model. So when the Dougherties drank their goat milk or ate their eggs, they weren’t really feeding themselves. Not really. They weren’t really producing that food—they were using their animals to transform bagged grains produced off their farm, to milk or meat or eggs produced on their farm. But is that self-sufficiency? It looks just as un-self-sufficient to have your animals’ food brought to the farm in a delivery truck (or in your own car) as to just skip the middlemen (middlecritters) and bring your own food to the farm. We’re back at the Iowan situation: all that land and no real production. Just dependence of a different sort.

But the Dougherties came to see a better way. They came to see that “the sun is the source of bioenergy for this planet. Animals and plants—including humans—live because the sun shines.” And hence, they concluded that “the sun, rather than our expensive feeds of questionable provenance, should be the power source for our farm. But how?”

The sun shines, the grass grows, the ruminants eat the grass, you eat the ruminants. Or drink their milk, or whatever. This requires zero deliveries from off the farm. This is real self-sufficiency.

For clarity, let me pause here and say that when Fathers Ligutti and Rawe, or when the Dougherties, or when I, speak of self-sufficiency, we do not have an absurd—to say nothing of morally abhorrent—notion in mind of being absolutely independent of all other people. Self sufficiency comes in degrees, and for our purposes in this review, we can simply say that within reason, more of it is better than less. The superiority of self-sufficiency to dependence is strongly affirmed by St. Thomas Aquinas. For example, he writes, “For the higher a thing is, the more self-sufficient it is; since whatever needs another’s help is by that fact proven inferior.”)

So the Dougherties describe a way of farming that puts the sun and its energy at the heart of things. They put it this way:

We have come to believe that the secret to the success of the small farm is the capture and harvest of as much as possible of the solar energy falling on the land—each day, week, month, and year—by grass and grazing ruminants. Our farming efforts are focused by the application of this principle, whereby the farm is not a staging ground for assembling nutrients, but a font from which nutrients originate, when basic elements are assembled in the leaves of green growing things, consumed by herbivores, and converted into generous quantities of high-quality proteins and fats. This is the theme of a flourishing biodiversity, each species of plant or animal feeding and being fed, assisting and receiving assistance from the rest, and all, ultimately, fed by the sun.

And there you have it. The philosophy of the farm, a philosophy which flows from Catholic social teaching and—delightfully, Thomistic metaphysics as well.

But The Independent Farmstead is not a philosophical tract. Nor is it a theological tract, for that matter: the Dougherties are, to my recollection, nowhere explicit about being Catholic. The clue is things like chapter headings from GK Chesterton, and their informal affiliation with an order of religious sisters. I’ve also noted their farm listed on the New Catholic Land Movement website. So I am making a bit of a leap when I characterize the book as Catholic. It’s not explicitly so. But it’s still wholly Catholic. And, as I was saying, it’s not a philosophical or theological tract. It’s a practical handbook for people who want to get started in grass farming.

The Dougherties begin by walking the reader through the process of finding and buying land, of figuring out your water supply and your fencing, and of caring for a variety of animals. They have chapters on ruminants (goats, sheep, cattle), chickens and hogs, and cover the basics of dairying and butchering. Their treatment of the functions of a small grass-based homestead is encyclopedic. On the whole, the writing is excellent. One exception is in the chapter on fencing—there are some passages that I find quite obscure, regarding spiraling and such. But generally, the thing is very readable, and very informative.

Nevertheless, the sum is greater than the parts. Where their work has its greatest value is in showing how the whole thing hangs together. The individual chapters are thin. This is as it needs to be: they can’t exhaustively cover, say, goat care in a book that tries to lay out how a whole homestead runs. If you’re really interested in learning about managed intensive rotational grazing—the art of putting the sun to its best use in feeding your ruminants—then you’d be well advised to look into one of the many fine books on that subject. Just for a few examples, Joel Salatin’s Salad Bar Beef or Sara Flack’s The Art and Science of Grazing. If you’re really interested in raising chickens, you can’t do better than Harvey Ussery’s The Small Scale Poultry Flock. If you want to raise ruminants you should look for Gianaclis Caldwell’s Holistic Goat Care or Joann Grohman’s Keeping a Family Cow. So far, I haven’t found any especially good books on raising hogs (Jerome Belanger’s Raising the Homestead Hog is the best I’ve come across). But for your hog-raising needs, there’s the freely-available website of Walter Jeffries of Sugar Mountain Farm. (You might note that the common thread here is Chelsea Green. This little Vermont press publishes the best farming books available today. Why they don’t have a good hog book out, especially since they’re neighbors with Mr. Jeffries, is a mystery to me. But I digress.)

In other words, the brief chapters from the Dougherty’s book can’t match the whole books by other authors. But nobody else that I’m aware of puts the whole thing together as well as the Dougerties do. Think of it as an aerial snapshot. You won’t learn all you need to know about grass farming from this book (or, for that matter, from any book or group of books). But you’ll get a great introduction and some real inspiration.

If you’re interested in living out the Church’s teaching as fully as possible, you will find a great deal of help and insight from The Independent Farmstead. But I’ll close with Joel Salatin, who writes, “I wish I had a nickel for every time I’ve finished speaking at a conference and someone asks: ‘How do I get started [farming]?’ My response: ‘What are you doing now?’” His point is that if you want to farm, you can’t wait until—somehow—a farm drops into your lap. If you want to farm, you need to…start farming. This might mean raising a few broiler chickens in your backyard, or renting a field down the road and planting a large garden or really just about anything else: anything you can do to get started actually farming. If you read the Dougherty’s book and you find yourself inspired—you wish you could pursue a more self-sufficient life, but you don’t happen to live on 24 acres zoned agricultural—you should not let that stop you. Ask yourself “what can I do NOW?” Salatin’s book is a good place to start looking for ideas.

About Dr. Patrick Toner 5 Articles
Dr. Patrick Toner is Associate Professor of Philosophy at Wake Forest University. He writes about analytic metaphysics and the thought of St. Thomas Aquinas...and Norman Rockwell. He earned his master's in philosophy from Franciscan University of Steubenville and his Ph.D. from the University of Virginia. Dr. Toner blogs at Lift Up Thine Eyes.

A faith in constant need of increase

Is opposition to the death penalty Thomistic?

Given Pope Francis’s own high regard for St. Thomas (together with the historical papal approbation he has enjoyed) when it comes to doctrinal issues, we […]

Third Sunday of Lent: True worship and the cleansing of the Temple