It may surprise many Catholic readers to know that Fr. Thomas Weinandy, OFM, Cap. has in recent years been one of the most significant living theologians for conservative Protestants. The reason for this odd celebrity of a Capuchin friar? His clear exposition and stalwart defense of classical theism has proved an inspiration and a resource for influential Protestant theologians. Indeed, figures such as James Dolezal, Matthew Barrett, and Craig Carter have found Weinandy’s work to be a vital source as they have sought to recover an orthodox doctrine of God in the face of the inroads made by evangelical biblicism and theistic mutualism, which have more in common with the Socinians of the seventeenth century than the magisterial Reformers of the sixteenth. 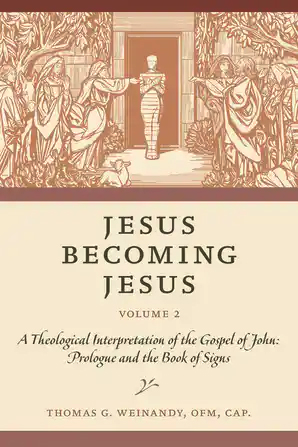 In light of this, it should be no surprise that Protestants such as myself greet every new volume from Weinandy’s pen with anticipation and enthusiasm.

Jesus Becoming Jesus: A Theological Interpretation of the Gospel of John: Prologue and the Book of Signs is the second volume in Fr. Weinandy’s projected New Testament theology. The first volume dealt with the Synoptic Gospels and is a frequent point of reference for the argument in this volume, the first of two on the Fourth Gospel. Thus, while this volume stands on its own merits, readers may find it helpful to have read the first volume before engaging it. As the subtitle indicates, this book deals with John 1-12, covering the chapters typically referred to as the Prologue and the Book of Signs. A second Johannine volume will cover chapters 13-21, conventionally referred to as the Book of Glory.

Weinandy’s basic argument is that the first twelve chapters of John present, first, an explicitly theological identification of Christ’s person (the Prologue) and then the revelation of his person and work through the seven miracles, specifically identified by John as ‘signs.’ These begin with the changing of water into wine at Cana and culminate in the raising of Lazarus from the dead at Bethany.

Weinandy sees this not as a simple, flat narrative but as a crescendo, climaxing in the Bethany incident. All signs lead to Lazarus’s resurrection, and Lazarus’s resurrection is the great revelation of the work Christ has come to do, rooted in the person Christ is. Indeed, Weinandy goes so far as to declare that Lazarus’s resurrection is actually the reason why Jesus was able to perform the signs that are placed earlier in the narrative: it is the great declaration of who he is and the work he is to do, prior to his own death and resurrection. The account Weinandy gives of this narrative is beautiful and compelling. This is a scholarly book, but at points has a doxological and devotional feel.

What Weinandy does so well is the integration of theological concerns with the biblical narrative or, to put it in more arcane language, the integration of ontological claims with the drama of salvation. Thus, for example, on page 90 he declares that ‘to be enfolded within the hands of the Father and the Son, to live in communion with the Father in union with Jesus the Son, is to possess eternal life.’ That is a pithy summary of the nature of eternal life, and is also the conclusion of several pages of discussion of the ontological Trinity in relation to the Incarnation. Anyone who think that there is an inevitable tension or fissure between classical theism, biblical exegesis, and biblical devotion might do well to ponder what Weinandy is doing here.

Similarly, Weinandy’s discussion of divine love (193 ff.) is an excellent example of how the simplicity of God is vitally important to understanding the transcendent and powerful nature of his love and, by way of implication, how finite human language needs to be understood when applied to the divine nature. If the constant temptation of so many Christians is to anthropomorphize God in a manner that reduces him to nothing more than human nature writ large, Weinandy’s careful refraction of such language through the lens of divine simplicity is a most helpful example of how to avoid such.

For this reviewer, perhaps the most compelling section of the book deals with the Transfiguration. That might seem an odd claim. As those familiar with the Bible will know, the Transfiguration occurs in all three of the Synoptic Gospels but is completely absent from that of John. Why? Weinandy persuasively argues that the purpose the Transfiguration – the dramatic revelation of the person and the divine nature of Christ through his human flesh via the medium of light – is one of the dominant themes throughout the Gospel John, from the Prologue onwards. Pointing both to the Johannine refrain of Jesus as light, and to the rather inept comment by Peter in the Synoptics (that he could build three tents for Jesus, Elijah, and Moses), Weinandy highlights the significance of Jesus’s declaration during the Feast of Tabernacles that he is the light of the world.

In short, John’s Gospel does contain the Transfiguration, or is at least preoccupied with the theological purpose for which the Synoptics include it. One might say that John is the Gospel of the Transfiguration. And Weinandy does not simply use this to point to the ontology of Jesus as God manifest in the flesh, but also as the fulfillment of the Temple: he is the new, living, light-filled Temple where God meets with humanity and where salvation and consummation are therefore accomplished.

Inevitably, Protestant readers will find points on which to disagree. Weinandy’s Marian devotion is clear in his treatment of the Cana wedding feast, where he sees Mary as the representative of the church. A Protestant is more likely to see Mary as incidental to the narrative of the miracle, with its focus on the bridegroom, not so much on the bride. Also, Weinandy reads John 6 in a highly sacramental way. Of course, many Protestants – specifically Lutherans, high Anglicans, and those Reformed (like myself) who follow Calvin, would agree with the generally sacramental point of the passage. Those Protestants who stand more in line with the Zwinglian tradition – some Reformed, most Baptists and most evangelicals – will disagree and likely consider Weinandy to have assumed the case rather than proved it.

Nevertheless, as with his treatment of the Lord’s Supper in the volume on the Synoptics, Protestants of a sacramental bent will find more with which they agree than disagree here. Weinandy is unashamedly faithful to the Catholic Church’s teaching, yet winsome in manner and positive in exposition.

I recently had the pleasure of dining with a number of Catholic friends and the topic of Fr. Weinandy’s work came up. When I commented that Protestants like myself love his writings, I was met with some bemusement. Why would conservative Protestants care for the work of a Franciscan? My answer was partly that which I gave at the start of the review: he has helped many Protestants think more clearly about classical theism.

But it is not just that. Weinandy has helped not only Protestant theologians but Protestant preachers. Many of such often struggle with how to maintain classical theism and yet do justice to the dynamism of the Gospel narratives. What Weinandy’s Jesus Becoming Jesus demonstrates on page after page is that the dynamism of the narratives only makes sense in light of the classical doctrine of God. In short, if you want to preach orthodox sermons that are also powerful, this series should occupy pride of place on your bookshelf. I eagerly anticipate the second volume on John.

About Carl R. Trueman 2 Articles
Carl R. Trueman teaches humanities at Grove City College in Pennsylvania. He is the author of the recent volume The Rise and Triumph of the Modern Self (Crossway).

The joyful, particular scandal of Advent

Pope Francis and the first line of the Catechism

Pope Francis, at yesterday’s General Audience, reportedly (see here and here and here) stated: Dear brothers and sisters, we are never alone. We can be far, hostile; we can even say we are ‘without God.’ […]