Wounded by original sin, people predictably make a mess of things, often in quite spectacular fashion. Of course, men and women, here and there, follow the better angels of their natures and bring order, beauty, and goodness to the world. Christians are no exception to this arrangement. Nevertheless, its army of critics are quick to point to the multitudinous Christian failings throughout history as evidence of Christian personal hypocrisy, irrationality, and even wickedness. Patent bias—with an admixture of gross oversimplification—is omnipresent. 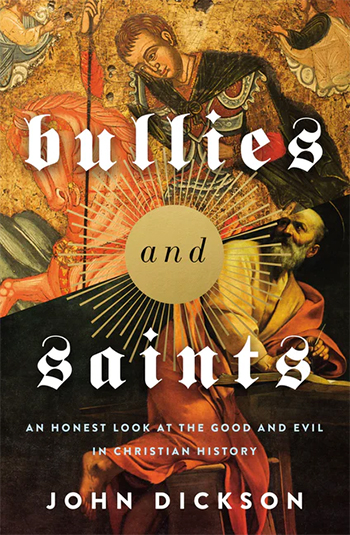 In his engagingly written Bullies and Saints: An Honest Look at the Good and Evil of Christian History, John Dickson, an Australian scholar and self-described “mild-mannered Anglican,” provides an antidote to this polemical abuse of history with “a century-by-century retelling of the bullies and saints of Christian history.” He moves, with deeply informed intelligence and accessible prose, over the revolutionary impact of the early Church (the common practice of infanticide was legally banned in 374 A.D., a vindication of the Christian view of all people bearing the image of God), the Crusades, the Galileo affair, the Inquisition, and so on—all the way to the present-day clerical sexual-abuse crisis. Dickson sorts through these complex areas with moral clarity and supplies valuable context where appropriate.

In light of current, tedious racial obsessions, Dickson’s analysis of Christianity and slavery is especially welcome. This historically universal practice of course survived the advent of Christianity, but its ultimate destruction was occasioned by the tireless work of Christians. Dickson is rightly emphatic on this point: “Abolitionism was not a secular movement.” To be sure, he concedes that “Christians were painfully slow in eradicating slavery,” but it is an incontestable fact that “every anti-slavery movement we know of – whether in the second, fifth, seventh, or eighteenth centuries – was heavily populated by Christians. And the main arguments against slavery were not economic, political, or scientific. They were theological.”

Dickson quotes Rowan Williams, the erudite former Archbishop of Canterbury, who succinctly observed: “If the abolition of slavery had been left to enlightened secularists in the eighteenth century, we would still be waiting.”

Not surprisingly, Dickson adverts to Christopher Hitchens at various points, and he ably rebuts the distortions spread by the latter’s militant atheism. Hitchens glibly pointed to Northern Ireland’s “Troubles” as one of many examples of “religiously inspired cruelty.” Dickson says that this contention is “out of all proportion to the facts.” He evaluates this conflict and discerns that “[r]eligious identity had morphed into political identity.”

“It is fascinating,” he continues, “to wander around Belfast, as you can do freely today, and look at the many surviving murals from the Troubles. Hardly any of them contain religious imagery or language. It is tribal and political, not at all theological.” For all his vaunted on-the-ground knowledge of the world, Hitchens completely missed this truth.

As he closes this book, Dickson reflects on the mindless, indiscriminate assault on Western monuments in 2020. “Personally,” he notes, “I have no problem with removing statues of people whose main contribution was evil”—the examples he adduces here are Stalin and Saddam Hussein. But he rejects the attacks on monuments of genuinely great but flawed men: Washington and Jefferson fall into this category. Dickson dismisses the dense, immature assumption that a great figure must be perfect, and he provocatively says that our own blindness to moral evils in our own time will undoubtedly one day be condemned. For instance: “When the link between ‘normal pornography’ and human trafficking is fully exposed, will future generations castigate us for making light of porn for the last three decades?”

Regrettably, Dickson’s chapter on the sexual-abuse crisis that has enveloped our age, titled “Moral Reckoning: Child Abuse in the Modern Church,” is disappointing. He is right that it is “a disaster the church has brought upon itself,” and his discussion is thoughtful (as far as it goes) but superficial. He does not consider the problem of homosexuality in the priesthood. Moreover, his keen historical sense is absent here: what makes the scandal so scandalous is the fact that it was the Christian revolution that placed pedophilia and homosexual conduct, broadly accepted (outside of Judaism) and commonplace in pagan antiquity, beyond the sexual pale. That is why the late Fr. Richard Neuhaus argued that fidelity to the Church’s sexual ethics is the only way out of the crisis.

Dickson candidly says that he writes as a “proud Protestant,” and he writes as an honest one, too. That is, he acknowledges the culpability of Protestants as bullies as well. His condemnation of Martin Luther’s astounding anti-Semitism, for instance, is unequivocal and does not rationalize in any way. Surprisingly, he neglects to touch on the truly righteous figures on the Protestant side: Dietrich Bonhoeffer, to select one of many possible examples.

Dickson’s concluding affirmation of the integrity of the Christian Gospel is warranted:

Jesus Christ wrote a beautiful composition. Christians have not performed it consistently well. Sometimes they were badly out of tune. But the problem with a hateful Christian is not their Christianity but their departure from it.

In a world where sinners always far outnumber saints, the wonder is not the seeming ubiquity of evil but the palpable presence of the good. This is the narrative of Christian history, as Dickson explains so effectively in this excellent, and admirably balanced, book.

Bullies and Saints: An Honest Look at the Good and Evil of Christian History
By John Dickson
Zondervan Academic, 2021
Hardcover, 328 pages

The Fall of Constantinople on May 29, 1453: A Cautionary Tale

An icon of the Blessed Mother looked down on me, then an atheist and former Muslim, as I visited Hagia Sophia years ago. The nave was so high that back in the day nearby residents […]

Freemasons and their craft: What Catholics should know

Many Catholics view Freemasonry as a dangerous—even Satanic—conspiracy founded to destroy the Faith. On the other hand, the Craft likes to present itself as “an ancient Order dedicated to the Brotherhood of Man and the […]

A breezy (and cautionary) history of the papal “dark age”

It’s tough to say when the saeculum obscurum really began, but by the time Pope Stephen VI had been strangled in the jail cell to which his enemies had confined him after he’d dug up […]