Mike Aquilina is the author or editor of some 50 books about topics ranging from sacred music (How the Choir Converted the World: Through Hymns, With Hymns, and In Hymns), to angelology (Angels of God: The Bible, the Church, and the Heavenly Hosts), to the apostles (The Apostles and Their Times: Archeology, History, and Scripture Unveil What Life Was Really Like During the Apostolic Age), to medicine (The Healing Imperative: The Early Church and the Invention of Medicine as We Know It), to the papacy (Good Pope, Bad Pope: Their Lives, Our Lessons), to the Church fathers (Faith of Our Fathers: Why the Early Christians Still Matter and Always Will). He is the Executive Vice President and Trustee of the St. Paul Center for Biblical Theology, has hosted nine television series and several documentary films, and is a frequent guest on Catholic radio. 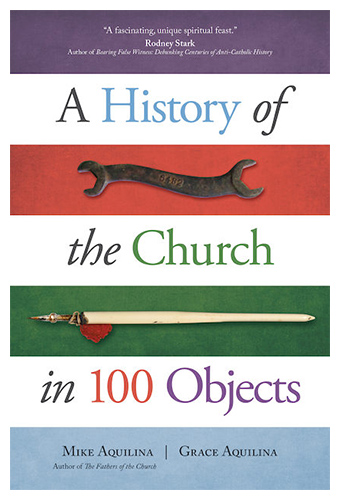 One of his most recent books is A History of the Church in 100 Objects (Ave Maria Press, 2017), co-authored with his daughter, Grace Aquilina, a freelance editor making her first foray into writing a book. Mike and Grace recently corresponded with Catholic World Report by email about their new book.

Catholic World Report: Mike, you’ve written dozens of books. Can you tell me the story of writing a book with your daughter? Whose idea was it, and how did it come to fruition?

Mike Aquilina: Tom Grady at Ave Maria Press pitched the book idea at me, and I mentioned it to my wife, who told me that this was a book I had to write. Well, I take her authority very seriously. So I called Tom back to accept his offer — and quite spontaneously I asked him if he’d be open to a book co-authored with my daughter Grace. Grace is a freelance editor, and she works at a library. I thought she might enjoy a project like this. Tom liked the idea; and later, when I mentioned it to Grace, she liked it too.

CWR: The concept for the book is intriguing; for an incarnational faith such as Catholicism, it makes sense to look at how objects tell the story of the Church. What sparked this concept? Did the idea change from the spark to fruition?

Mike Aquilina: The concept is brilliant, and for that all credit goes to Neil MacGregor, the director of the British Museum. He wrote A History of the World in 100 Objects, which was first a BBC radio series and then a bestselling book. Soon there were many imitators — histories of baseball, sailing, birdwatching, cycling, the Civil War, and the Battle of Waterloo, all told using artifacts.

But nothing lends itself so well to this treatment as the Catholic faith. Catholic Christianity is a religion of stuff: ashes and incense, icons and statues, bread and wine, water and oil, incorrupt bodies, and bones encased in glass. We’re sacramental, incarnational. Catholicism is not just about some invisible, purely spiritual life. We’re about the whole person. So matter matters. God saves his people by means of stuff.

That was our premise from the beginning. We stayed with it through the process of writing.

CWR: How did you go about selecting the 100 objects?

Mike Aquilina: We wanted to launch every chapter with arresting photos and captivating stories. And we wanted the book to be fun. So we decided to look for the sort of items you don’t usually see in history books: a pistol, a pill, a set of bookshelves, a hole in the wall, a satellite dish, a fountain pen, and so on. Whenever possible, we chose intrigue over familiarity. But we also included a few of the things you’ll see at the popular tourist and pilgrim destinations.

CWR: Are there objects that you wish you had been able to include, but ended up not being able to?

Grace Aquilina: Yes! Both of us are big fans of the pianist Mary Lou Williams. She wrote a jazz Mass, and we thought it would be fun to use one of her vinyl LPs to open a chapter on modern liturgical music. We tracked down a couple online and bought them for the photo (one of them is even signed!). Unfortunately, the chapter didn’t fit in the progression, and we had to cut it. We were both disappointed, but now we have a signed Mary Lou Williams vinyl!

Mike Aquilina: Oh, yes, Mary Lou! That was a loss. We wanted to open another chapter with Pope John Paul II’s ski jacket — but we couldn’t get approval from the archivists and attorneys in time to meet our deadline. So maybe we’ll have to write a second volume.

CWR: In the process of writing the book, did you discover anything that surprised you? Did you have particular favorite objects or stories?

Grace Aquilina: The process really depended on the object. I mostly did research. Usually we’d talk about where we wanted to go with a specific object, and I would collect sources and compile all the information I thought could be useful. At that point Dad would often remind me that we had to keep it down to seven hundred words, and I would cut the mountain down to just the necessary information. That was hard — some of the objects had such fascinating histories!

Mike Aquilina: Whenever I do research, I find surprises. So we learned a lot as we prepared every chapter. We tried to pass along that element of surprise to the reader, and I think we succeeded. We’re getting wonderful reviews and mail. A noted historian reviewed the book and called it a “page-turner.” He said he was consistently surprised by the objects we chose, and he guaranteed that “everybody will learn from this book — even those who think they know church history well.”

Mike Aquilina: Grace works at a library, so she has endless resources. She would do preliminary research and gather the details into a Word file. I’d dig a little more and put in my two cents. Then we’d pass the chapters back and forth until we had them where we wanted them.

Grace Aquilina: I know that I plan on working with words for the rest of my life. I’m not sure if that means writing, editing, or more research, but I know that I love the written word.

About Paul Senz 77 Articles
Paul Senz recently graduated from the University of Portland with his Master of Arts in Pastoral Ministry. He lives in Oregon with his family.

“Loosing the Lion”: Why the “underdog” Gospel is a model for preachers and a rollicking good ride

“Mark’s is a Gospel of secrecy, of mystery,” says Dr. Leroy Huizenga, author of a new commentary on the Gospel of Mark, “and so one […]

On great exemplars of authentic manhood

One cheer for George Will’s The Conservative Sensibility

I have been following George Will’s thought for a long time. I’m old enough to remember when his column occupied the last page of Newsweek magazine every other week and when he sat in the […]